ABOUT ADRIAN: Adrian joined the Chiefs in 1998 as the club doctor and has developed the medical services at the club from one very part-time doctor and one part-time physio in 1998, to a team of three doctors, six physiotherapists and two sports therapists today.

Adrian works part-time at the club, alongside his other role which is that of the Executive Medical Director of the Royal Devon and Exeter Hospital, where he sits on the board of the hospital as its most senior doctor. He is a Consultant Emergency Physician, having been appointed to the RD&E 1996 and for many years ran the Accident and Emergency Department.

Adrian holds qualifications in emergency medicine, paediatric medicine, pre-hospital medicine and sports medicine. He is also an instructor and original contributing author on the RFU's pre-hospital immediate care in sport course, that trains all doctors and physios working at international premiership and championship level in the English rugby. Adrian is the club representative on the medical advisory group to English rugby's professional game board.

Adrian is an Honorary Associate Professor in healthcare leadership and management at the University of Exeter. 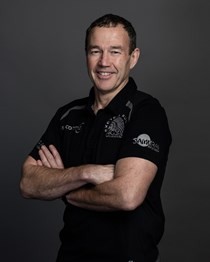