ABOUT RICKY: Cornishman Ricky joined the Exeter Chiefs coaching staff in 2009, this after an impressive playing career which saw him play not only for the Devon club, but for the likes of Worcester Warriors, Manchester, Cornish Pirates, Mounts Bay and Bath, the latter of whom he joined in 1996 from their club academy.

The talented scrum-half forced his way into the first team reckoning in the first year of the professional era, making his debut as a replacement for Mike Horne (on the wing) in the 71-20 defeat of Wakefield. He went on to make a further substitute appearance, again on the wing for Jim Greenlees in a defeat at Bridgend.

The following season saw Pellow returning to his more conventional role of scrum-half, from where he made a league debut as a replacement for Charlie Harrison at Harlequins. A first start followed a week later in the Heineken Cup at Sardis Road, Pontypridd, and he would make 14 appearances in total for Bath’s first fifteen during that campaign.

The signing of Andy Nicol and Steve Hatley, plus the emergence of Gareth Cooper limited Ricky’s chances at the club and he left to join Exeter.

He made a return to the Recreation Ground in 1999/2000 as injury cover and he went on to play in a further four matches for the club, taking his overall total to 22.

A two-year stint followed at Worcester Warriors in National League One, after which he moved to Manchester where he was a near ever-present in the No.9 jersey during the 2002/03 season.

However, the chance to return back to the Duchy arose the following season and Pellow took up the chance to join the ambitious Cornish Pirates, who at the time were making great waves with successive promotions under the guidance of former Welsh international Kevin Moseley. Pellow would spent two years with the Pirates, before a short stint away from the game saw him return to the Mennaye Field, this time with Mounts Bay, whom he helped to win the National Intermediate Cup against Dunstablians at Twickenham in 2007.

Part and parcel of the coaching set-up at Truro College, Pellow's enthusiasm for the game was clear to see and Robin Cowling helped in his development introducing him to the Chiefs and their new head coach Rob Baxter in 2009.

Since then, Pellow has been an integral part of the Exeter coaching staff, helping nurture not only the careers of local youngsters such as Jack and Sam Maunder, Stuart Townsend and Joe Snow, but also more established names like Will Chudley, Junior Poluleuligaga, Haydn Thomas, Nic White and Sam Hidaldgo-Clyne.

In recent years he has been entrusted with heading up the club's Anglo-Welsh Cup and Aviva A League sides, as well as the pre-season Premiership Sevens squad. 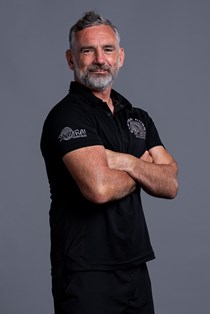