ABOUT ROB: A former soldier and Royal Engineer Rob represented the Army and Combined Services between 1989-1996.

With the advent of professionalism in club rugby, Rob turned pro with London Scottish, going on to win promotion with them into the Premiership in 1998.

Two years later, the imposing forward moved to Northampton Saints. He would spent four seasons at Franklin's Gardens before retiring from the game to head up the new academy alongside current Chiefs Head Coach Ali Hepher.

In 2010, he joined the Rugby Football Union as Head Coach of England's Under-20s programme and under his guidance, the team won an unprecedented three successive U20 Six Nation titles, including a Grand Slam in 2011.

During his tenure as Under-20s coach, Hunter worked with a wealth of English rugby's young talent, including the likes of Owen Farrell, George Ford, Henry Slade, Jack Nowell, Luke Cowan-Dickie and Matt Kvesic.

Keen for a new coaching challenge, Hunter departed the RFU role in 2013 and moved to the Chiefs, where his resumed his coaching partnership with Hepher. Taking on the role of Forwards Coach, it wasn't long before the former servicemen was helping his new club to their first piece of major silverware with Exeter lifting the 2014 LV= Cup with victory over Northampton Saints at Sandy Park.

Two further appearances in the Anglo-Welsh Cup finals would follow for the Chiefs, as would a first appearance in the Aviva Premiership final in 2016, where European champions Saracens proved too strong for the Devon club at English rugby HQ.

A year later, though, Hunter was again part and parcel of the Chiefs coaching team who guided their side back to Twickenham for another Premiership Final where, on this occasion, they emerged victorious, defeating rivals Wasps in extra-time. 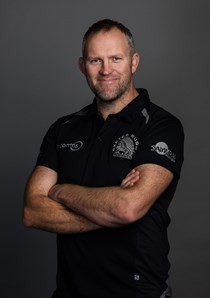