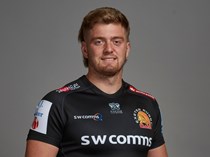 Brought into the Chiefs senior squad for the first time this season, Charlie Wright is a highly-rated youngster with the world at his feet.

One to watch within the Academy structure, Wright's all-action displays from the back-row have won him many admirers - not just at the Chiefs - but further afield, where he was previously called up to the England Under-18s squad.

The former Honiton School pupil was brought to the attention of the Chiefs by former player Tom Skelding, before he continued his education working within the Academy set-up at Exeter College.

Although two serious shoulder injuries have stunted his progress in recent times, Wright hopes to be back in competitive action this season.