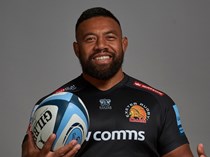 The powerful hooker arrived at Sandy Park ahead of the 2014/15 season having been a key figure in the Jersey side competing in the RFU Championship.

Head coach Rob Baxter said the Tongan international would offer “something different” to his squad after they were forced to look for a replacement following the retirement - due to injury - of Chris Whitehead following the club’s LV= Cup success over Northampton Saints.

Having played lower league rugby in Australia, Taione’s first introduction into the senior ranks of the game came with the Waratahs in 2011. Although first team opportunities were limited for Taione in Sydney, he later moved onto Super Rugby rivals Western Force, where he featured in a number of first games during the 2012/13 season.

A move to the Channel Islands followed for the Nukalofa-born forward, who quickly established himself as a regular for the Reds. His form did not go unnoticed and he was soon brought to Devon on an initial two-year deal by Baxter.

With 28 international caps to his name, Taione has not only featured in Test Matches and the Pacific Nations Cup for his country, but he was also part of the Ikale Tahi during the Rugby World Cup in 2015.

At the Chiefs, Taione has at times found first team opportunities hard to come by due to the form of Jack Yeandle and Luke Cowan-Dickie predominantly, but when called upon he is a more than capable performer. His powerful scrummaging and his ability to sniff out a try make him a quality front-row forward.

A knee injury sustained in the warm-up games ahead of the 2019 Rugby World Cup meant Taione was forced to miss the tournament in Japan.