Exeter Chiefs signed Argentine wing Facundo Cordero prior to the restart of the 2019-20 season.

The gifted back joined the Premiership outfit from Los Ceibos in his homeland and follows in the footsteps of his brother Santi, who joined in 2018.

Fleet-footed and with a real turn of speed, Cordero didn't take long to make his mark for the Devonians, scoring a try on his Gallagher Premiership debut away to Saracens at Allianz Park.

The Exeter Chiefs are Cordero’s first foreign club and his second foreign experience. In 2019 he played for the Jaguares XV in South Africa’s Currie Cup First Division. The Argentine side were undefeated for the season and Cordero was a try scorer in the final against the Griffons.

Since arriving at Sandy Park, Cordero has produced some dazzling display in the Exeter shirt and his form was rewarded during the Autumn of 2021 when he was called into the senior Argentina squad for the first time.

And it was in November 2021 that Cordero made his full Test debut for the Pumas, coming off the bench in their clash with Ireland at the Aviva Stadium in Dublin. 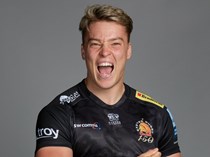