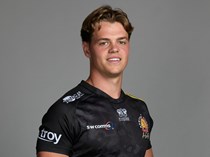 Chiefs’ Director of Rugby, Rob Baxter, said of the young playmaker: “He is one of those guys who has ended up here probably on the flip side of what was going on with COVID-19. We were looking at seeing what options were around and what would fit in and Jack came up. Although he’s been based in Australia for a while, he’s EQP [English qualified player] and he was playing club rugby and age group rugby over there.

“You watch him and you can see there is something there about him. There’s a bit of spark, there is something special and initially we started to think of him as someone who could come into our squad for the 2020/21 season, but actually things progressed away from us a little bit because things developed for Jack in Australia, moving into the Waratahs Academy and offers from them.

“Then what happened with COVID, those options moved away from him, so effectively he was someone who was on the market, went off the market, then came back on the market again! We have relooked at things and he is very much jumped an opportunity to come, initially for one year, to see how things go, see how he settles in and we get to have a good look at him.

American-born Walsh has previously represented Australia at both Sevens and Under-18s level.