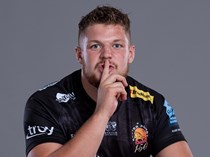 Watford-born prop James Kenny is a product of the club's highly successful Academy programme, having previously studied at both Bicton and Exeter Colleges.

As a youngster, he played his youth rugby at Chess Valley and Kingsbridge, before he started to develop his game under the tutelage of the coaches at both Bicton and Exeter College.

Mobile and dynamic around the field, Kenny has in recent seasons developed his game at senior level by featuring for the Exeter Braves in the Premiership Rugby Shield and whilst on dual-registered terms with Plymouth Albion in National League One.

Certainly one with a bright future ahead of him, he has featured for the Chiefs first team in the Premiership Rugby Cup, including when they lifted the trophy against Bath at Kingsholm in March 2018.

This season he will develop his rugby career whilst on dual-registered terms with the Cornish Pirates in the RFU Championship.