Welshman Oli Burrows arrived at Sandy Park during the summer of 2000 alongside compatriots Dan John, Dafydd Jenkins and Christ Tshiunza.

Having been introduced to rugby at the age of five, the dynamic hooker would play all of his young rugby at hometown club, Neath Athletic RFC, working under the guidance of coach Lee Tregoning.

He enjoyed a two-year stint at Millfield School, during which time he was also part of the Ospreys Academy, after which he came onto the radar of the Chiefs, who moved quickly to acquire his services.

Capped at both Under-20s and Under-18s level for Wales, Burrows is currently combining his role with the Chiefs with that of studying for a business degree at the University of Exeter.

He made his first team debut for the club in the Premiership Rugby Cup encounter against Bristol Bears in November 2021. 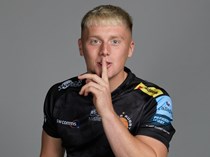