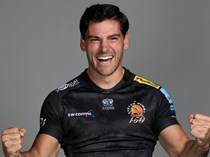 A new signing by Rob Baxter ahead of the 2020/21 season, the Covid-19 crisis meant the Scottish international actually arrived in Devon earlier than anticipated and was quickly introduced to his new club as they looked to finish their disrupted season.

He quickly settled to life with his new club, featuring in virtually all of the games between restart and the culmination of the campaign. He marked his first start for the Chiefs by scoring in their impressive away win at local rivals Bristol Bears.

By the end of the season, Hidalgo-Clyne had not only helped the Chiefs to lift a second Gallagher Premiership title, but it was his crucial turnover that helped Baxter's side to lift a first-ever Heineken Champions Cup crown with victory over Racing 92.

His impressive end-of-season form also saw him recalled to the Scotland squad for the first time in years, featuring for Gregor Townsend's side in the Autumn Nations Cup.

Born in Spain, Hidalgo-Clyne moved to Scotland at the age of three and was quickly introduced to rugby at an early age. His talents were clear to see from the outset and having spent the 2011/12 season featuring for Scotland 7s, it was at Edinburgh Rugby where his career really began to take off.

He would spend seven successful years in the Scottish capital, before he opted for a switch to fellow Pro14 rivals, the Scarlets in 2018. His time in Wales proved short and sweet and since then he has featured for Harlequins (on loan), Racing 92 and, more recently, Lyon.

But, according to the man himself, his move to Devon has come at the ‘perfect time’ and he says the opportunity to join the Chiefs was one that he was not going to turn down.