Exeter's marquee signing ahead of the 2019/20 season, big things were certainly expected of the two-time British & Irish Lions tourist and back-to-back RBS 6 Nations Player of the Championship winner (2016 and 2017).

Arriving in Devon after nine years with Glasgow Warriors, Hogg quickly settled into his new surroundings, proving an instant hit - both on and off the field - with his new club.

Although his first season was curtailed due to the global outbreak of Coronavirus, when play resumed the Chiefs were already in a strong position both in the Premiership and Champions Cup. Indeed, he marked the club's return to action in August 2020 by scoring in his side's comprehensive home victory over Leicester Tigers.

Over the coming weeks, Hogg - who was also named the new Scotland captain - would be instrumental in helping the Chiefs go on to lift a second Premiership title against Wasps, as well as a first-ever Champions Cup success against Racing 92.

Since debuting for the Warriors back in 2010, the talented Scottish international has gone on to establish himself as one of the modern-day greats, where his work-rate, consistency and attacking brilliance make him a potent threat for any opposing side.

In the summer of 2021, Hogg went on his third British & Irish Lions tour, featuring as one of four Chiefs selected in Warren Gatland's squad to take on reigning world champions South Africa in their own backyard. Hogg featured in two of the three Tests against the Springboks, before returning home to feature for both the Chiefs and Scotland during the course of the 2021/22 season. 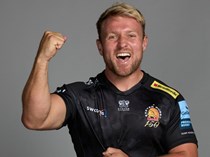