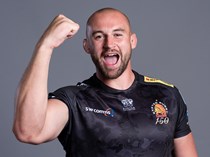 Hailing from North Yorkshire farming stock, second-row forward Will Witty joined the Exeter Chiefs at the start of the 2019/20 season.

Before arriving in Devon, the versatile forward - who can play in the second-row or back-row - spent the previous six years at Gallagher Premiership rivals Newcastle Falcons, who initially invited him into their Academy in November 2013 after impressing for the club in the Aviva A League.

Clearly they liked what they saw of the youngster, whose rugged approach soon brought him through the ranks and into the first team, where he debuted in their 2014 European Rugby Challenge Cup game against Bucharest Wolves, a game which also saw him cross the line for his first senior Falcons try less than two minutes in.

He continued to play a significant role for the club in that competition and went on to make his first Premiership appearance later that season away to Gloucester, playing once in the league the following season before staking a claim with 16 Premiership outings during 2016-17.

The tireless worker has already amassed a number of representative honours including caps for England Students, England U19s and North U18, as well as England Under 20s, for whom he turned out during the 2015 Junior World Championships in Italy as England made the final.

Although first team chances were limited during his first year in Devon, Witty has made the most of his opportunities during the 2020/21 campaign, forcing his way into Rob Baxter's first team plans with some notable displays in the Premiership.