ABOUT ALEX: Alex was something of a late-starter in rugby terms, first playing for Exeter University at the age of 22.

Her late start to the sport has not held her back though as, post university, Powell embarked on a stint in Australia with Canberra Royals, before returning to England with Wasps RFC, spending six seasons with the London club, before returning back to the city she began her rugby journey in with the Chiefs this season.

Away from the sport, Powell is a trainee sports & exercise psychologist, working for the NHS as a psychology practitioner. 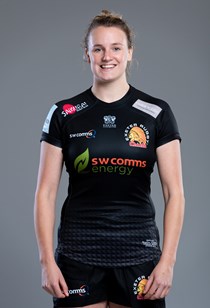