ABOUT FFION: Scrum-half Ffion has been playing rugby all her life, having started at her local club at just six-years-old.

An experienced operator, she has captained the Welsh University 7s side, alongside her region, Scarlets.

She has also become a mainstay on the international stage for Wales, having won 14 caps for her country in 15s since her first cap against South Africa in 2018.

She has also represented Wales on the 7s circuit, helping her side qualify for the 2018 Commonwealth Games through performances in the Rugby Europe 7s 2017 series.

A very good passer of the ball and a player who likes to spot a gap in the opposition defence, her first season at the Chiefs started brightly before she was forced to undergo surgery. 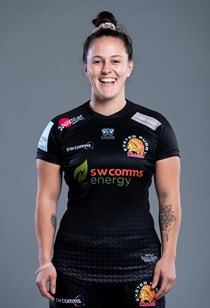