ABOUT FLO: A real find for Susie Appleby ahead of Exeter's inaugural season in the Allianz Premier 15s, Flo Robinson has enjoyed a stellar first season for the Devon club.

A scrum-half by trade, her sister Emily plays for Premier 15s rivals Harlequins, against whom Flo earnt her first start for the Chiefs.

Robinson’s speed around the base of the ruck saw her selected for the England Under-20s Summer Tour in 2019 and the England U18s 7s side that competing in the U18s Rugby Europe competition in Poland that same year.

Has stepped up impressively during the course of the season with Ffion Lewis sidelined and Patricia Garcia out through suspension. She has also shown her versatility by also playing in the centre when called upon. 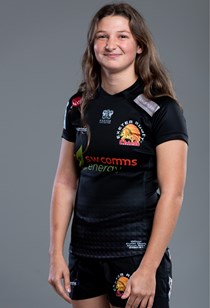