ABOUT JENNINE: Jennine’s rise since beginning to play rugby in 2016 has been nothing short of meteoric. Having previously played university softball, Duncan quickly progressed in rugby union, initially as a 7s player.

In 2016 she competed in two USA Falcons tours and selected in the Club 7s National Championship Dream Team, winning the title a year later. In 2018, she was named MVP at her club Seattle Saracens, capping off the season by earning her first cap with the Women’s Eagles 15s against England in November.

A classy winger, sadly an opening day injury sustained in Exeter's game at Gloucester-Hartpury sidelined her for a large chunk of the first half of the season. Although the American returned to play, impressively in the home game against Wasps, the injury flared up again and she was forced to undergo surgery on a torn hamstring, ruling her out for the remainder of the 2020/21 campaign. 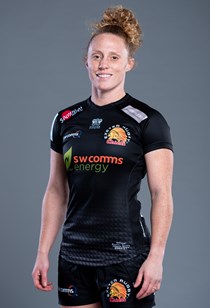