ABOUT KATE: American national captain Kate began her rugby journey in 2013 and just over a year later, she had made the step into 7s, representing the USA up until 2018, helping the 7s team qualify for the Rio Olympics in 2016.

That same year, she made her international 15s debut and was part of the American national side that finished fourth at the 2017 World Cup in Ireland, securing the same finishing position a year later at the 7s World Cup.

A fierce on-field competitor, she has been a leading light in helping the Exeter Chiefs settle to life in their first season in the Allianz Premier 15s.

Not only a robust defender, who loves to tackle, her speed around the field make her an equally deadly attacker for Susie Appleby's side.

She has spent much of the season playing in the back-row, but has shown her versatility by stepping in at centre when called upon. 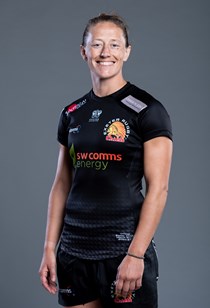