ABOUT KAYLEIGH: Local girl Kayleigh is no stranger to the familiar surroundings she finds herself in, having grown up around the club that her father Bob used to play for.

Armstrong was part of the highly-successful Exeter University Women’s Rugby team that secured BUCS Gold in both 2017/18 and 2018/19 - and was a part of the Bristol side that finished runners-up in the 2017 Women’s Premiership, scoring in the semi-final against Saracens.

Armstrong has also sampled rugby outside of the United Kingdom, spending a period of time playing junior rugby for the Ai Ain Amblers when living in the United Arab Emirates.

She fulfilled a lifetime goal in scoring on her Allianz Premier 15s debut for the Chiefs against Harlequins in October. 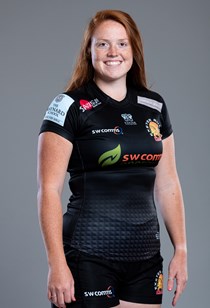