ABOUT LAURA: Prior to her rugby career, Laura - better known to many as 'Bimba' - was an international level hammer thrower.

After sustaining an injury, she began to attend rugby sessions in Cadiz on the advice of a friend and hasn’t looked back since. Having played in Spain, France and the USA, as well as playing for DMP Sharks before signing for the Chiefs, she brings a wealth of experience to the Exeter Chiefs setup.

One of captains for the national team, she represented Spain at the 2017 World Cup in Ireland and won three domestic titles in her homeland as a player. 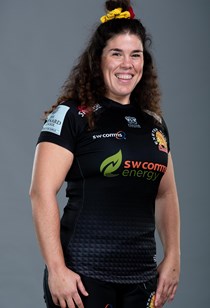