ABOUT LINDE: Club captain and Dutch national captain Linde has led from the front since arriving from Toulouse in the summer, scoring the club’s first-ever Allianz Premier 15s try against Gloucester-Hartpury in the opening round of the 2020-21 season.

Having started playing rugby at 17, van der Velden’s career has gone from strength to strength in both 15s and 7s. She made her international 15s and 7s debuts just four years after starting to play the sport, highlighting her natural talent.

Competent in both forms of the game, she scored her first World Series try for the Netherlands at the Langford 7s in 2017 and was also named Dutch Player of the Year for 2019.

In Chiefs' colours, she has led from the front, both on and off the field, providing leadership to the new-look team as they look to make a name for themselves in the Premier 15s.

Away from the field, she is combining her playing with a day job at Newton Abbot-based architects, PMR Architecture 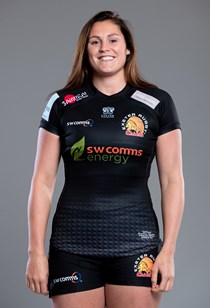