ABOUT LOTTIE: Lottie’s rugby adventure began at her local club Kingsbridge RFC, playing alongside the boys.

She continued to play rugby whilst studying at the University of Bath, winning eight caps for England U20s during her time at university. After graduating, she signed with Bristol, where she played top-level Premiership rugby.

The gifted back is also an experienced 7s player, having made her first senior 7s cap during the Clermont-Ferrand HSBC World Rugby 7s Series event in June 2017.

Thanks to the nature of 7s, Holland played in countries such as Dubai, Trinidad and Tobago, Spain and Sweden, before moving back to the 15-a-side version of the sport.

She now combines rugby career with the Chiefs alongside her job at Wills Marine in Kingsbridge. 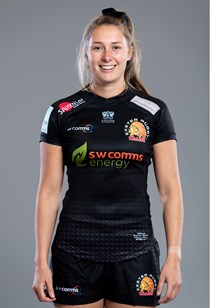