ABOUT MEG: Scrum-half Meg is well-known to Chiefs head coach Susie Appleby, who worked with the diminutive Welsh youngster during her time with previous club Gloucester-Hartpurt.

Keen to continue working with the able No.9, Appleby persuaded Davies to move to the Chiefs as as an apprentice player, where she has been able to work closely with the experienced duo of Ffion Lewis and Patricia Garcia, as well as Ricky Pellow, who oversees the skills coaching for the men's side at the club.

After starting out in the sport at nine-years-old, she has continued to impress and rise within the game. She was selected to play for Cardiff Blues U18s and Wales Emerging U20s, before representing her country at U18 level and in 7s in Poland.

Davies made her senior Chiefs debut in the home game against Saracens, where Exeter's victory ended a 33-game unbeaten run for the defending Allianz Premier 15s champions. 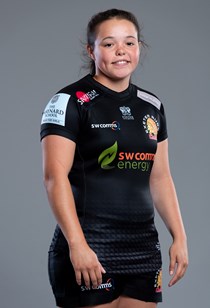