ABOUT MERRYN: Cornish girl Merryn started out at Liskeard-Looe alongside her brother, before moving to Newquay Queen Bees U15s at the age of 12.

Keen to develop her career within the game, she moved to Exeter to attend Exeter College, where she captained the side in her second year. She was also selected for Cornwall and England U18s the same year.

Doidge has since progressed through the age groups, representing England U20s and the National Academy side against the USA and Canada, and prior to joining the Chiefs she played in the Premier 15s for nearby rivals Bristol Bears.

A virtual ever-present during her first season at Sandy Park, Doidge has shown her worth for Susie Appleby's side, mainly filling the role of full-back, but also stepping in on the wing if called upon.

Alongside her rugby career with the Chiefs, she is also currently a student at the University of Exeter, studying sports science. 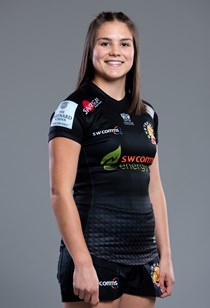