ABOUT MICHAELLA: England U20s international Michaella started her rugby journey in her native Cornwall, first starting out as a 10-year-old with Camborne RFC, before moving to Newquay to play for an all-girls team from the age of 15.

She has represented her county at U15, U18 and senior level and has also earnt six caps for England U20s, scoring against the British Army and being part of the first England U20s women’s side to beat the French U20s in France.

She made her debut for Susie Appleby’s side in their Allianz Premier 15s opener away to Gloucester-Hartpury. 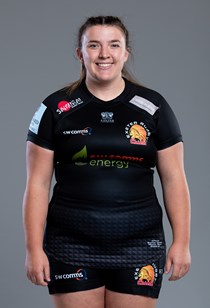