ABOUT MILLA: Milla’s appetite for the sport has been there from the start of her rugby journey.

She started playing the sport at U15 level for Kingsbridge RFC, helping develop Kingsbridge’s girls team, which had not previously existed before her and several of her friends began to play the sport.

She represented Devon at age group level and played for Bristol Bears at 17, before joining the Chiefs this season as an apprentice player. 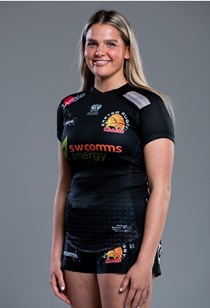