ABOUT ROSANNA: Second-row Rosanna started playing rugby at 15, before studying sports and performance excellence in rugby at Hartpury College.

Following this, she took three years out from the sport, but returned to playing with Saracens, whom she spent three seasons with at Allianz Park.

She is now in her final year at the University of Plymouth, studying ocean science and marine conservation. 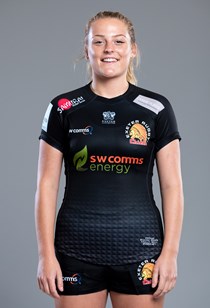