ABOUT TAYLOR: Exeter's tactician in their back division, Canadian international Taylor has settled to life well in Devon and has produced a string of high-class performances in the No.10 shirt for the Chiefs.

Working closely with the likes of Ricky Pellow and Gareth Steenson from the men's coaching staff, she has used her experiences so far with the Chiefs to help drive her team forward in the Allianz Premier 15s.

Tough-tackling for a fly-half, she has previously represented her country at multiple levels of the game, including competing  at the Youth Olympics in 2018 in Buenos Aires and the 2017 Youth Commonwealth Games, where she won a silver medal.

Her performances stood out for the selectors, as she was selected to captain Canada U18s at just 15 years-old and in 2018, she received her first senior cap against England and was named Canadian Young Player of the Year. 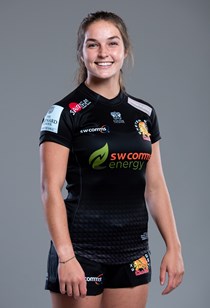