Chiefs side to face Harlequins

Confidence restored, tries in the bag and crucial league points on the board, life is good back within the confines of Sandy Park as Exeter Chiefs prepare for their latest Aviva Premiership encounter tomorrow.

Fresh from handing out a 47-16 defeat on lowly London Welsh a week ago, Rob Baxter's side head for reigning champions Harlequins this weekend not only looking to back up that stylish showing, but at the same time hoping to inflict a rare league double on their capital-based hosts, who were humbled 42-28 in the corresponding fixture back in October.

Impressed by the way his team clinically picked off the Exiles last time out, Baxter is hoping for a similar outcome at the Twickenham Stoop as the Chiefs continue to keep pace with the division's frontrunners.

"Last week was a very good performance from us, but now we've got to make sure London Welsh was not a one-off performance and that we show the same enthusiasm and attacking intent for the rest of the season," said the Chiefs head coach.

Having gone five top flight games without a win, last week's victory for the Chiefs provided them with a welcome lift as they move towards the business end of the season.

"What gives us heart is knowing we are a good side," said Baxter. "We have avoided getting on emotional roller coasters and being down our ourselves and I think that saw some results at the weekend. We have stayed positive about what we've tried to do. The results have not always gone our way and we are very aware of that and there have been things we have had to work on. Being honest, we're still a little disappointed about the second half up at Sale, simply because that was a game where we got ourselves in control; we we're up and running; we'd developed a lead, only to let it slip away.

"That said, you look at where we are now, three points behind where we were this time last season, which considering the way some people talk about the latest run of games we've had, you would not believe it is that close. Now I believe we have an opportunity to pull some results together and do very well, or we have an opportunity to let the season fizzle out. I think looking at the guys this week in training and their attitude, it shows you where their minds are.

"Last week's win has kept the season alive for us. We were getting in danger of slipping into that position in the league where maybe we couldn't do too much upwards and we were perhaps having to be careful of what happened below us. The situation has changed after five valuable points and the season is exciting again for us.

"That is how we have to approach this weekend, we have to be excited by going to Harlequins and play in that manner. We are a good side and dangerous when we do that, so we will aim to be very positive."

Although Harlequins will be minus England stars Chris Robshaw, Danny Care, Mike Brown and Joe Marler for this latest encounter, Baxter acknowledges the threat Conor O'Shea's side pose - particularly on home soil - and has focused his thoughts accordingly.

"I'm not too concerned about doubles and beating individual teams, we have always just talked about what we can try to achieve," added the Exeter leader. "The reality is Harlequins are a very good side and are a team that have a little bit of swagger about them and rightly so because of the way they play and the results they are getting.

"They are a team that are playing in every area of the pitch and in a variety of ways. That makes them dangerous, but in some ways it's also a little bit easier to prepare for because you prepare for everything. We like to play a little bit like that ourselves and hopefully that holds us in good stead. What I've said to the guys is we just have to be focused, switched on and stay alert." 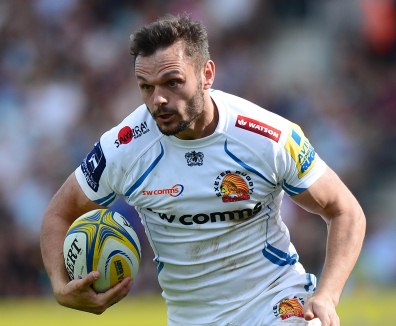 Heading into the game the Chiefs have been forced to tinker with their winning formula following injuries picked up in the Welsh win. In the pack, Hoani Tui and Dean Mumm are both ruled out, so Alex Brown comes in for his first-ever Premiership start at tight-head, while Welch will partner Tom Hayes in the second row. Behind, Kiwi centre Jason Shoemark is another casualty, so Phil Dollman (pictured) is promoted from the bench.

The elevation of Brown, Welch and Dollman into the starting line-up means there are recalls to the match-day squad for Craig Mitchell, James Hanks and Ian Whitten.

CHIEFS SIDE TO FACE HARLEQUINS