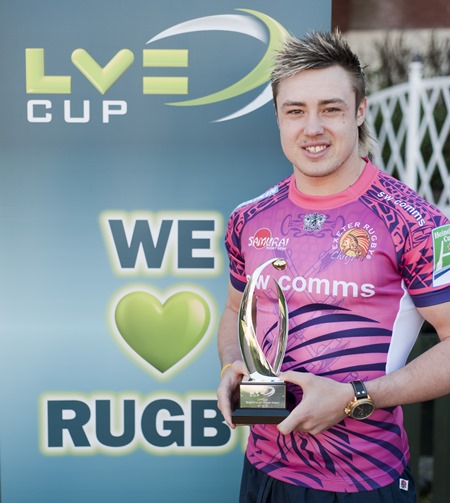 Exeter Chiefs young gun Jack Nowell has spoken of his delight after he was today crowned as the LV=Breakthrough Player for the 2012/13 season.

Cornishman Nowell beat off nine other rivals for the prestigious accolade which is designed to recognise the next generation of young players under 23 competing in the LV=Cup; a competition renowned for developing future international stars.

Nowell was nominated for the LV= Breakthrough Player Award following his outstanding performances throughout all four pool stages of this season’s LV=Cup and went onto beat the likes of Bath’s Tom Heathcote and Harlequins Luke Wallace to win this year’s award.

His eye-catching displays in this season’s competition, which included scoring a brace of tries in the win away to London Welsh, were backed up by the statisticians at Opta, who ranked him as the top performing back in the LV=Cup this season.
Nowell beat more defenders and made more metres in attack than any other player in the competition, this despite Exeter’s narrow failure to reach the knock-out stages.

Truro-born Nowell follows in the footsteps of Gloucester Rugby’s Jonny May, winner of the inaugural LV=Breakthrough Player Award last year. Just as May went onto represent England that summer, so Nowell did last Friday, debuting for the England Under-20s against Italy at Franklin’s Gardens, where again he crossed the whitewash twice.

As part of the prize for winning the award, Nowell will also receive a £1,000 donation, which he will donate to a club of his choice, from LV= as part of the tournament sponsors commitment to fostering the development of future rugby stars. 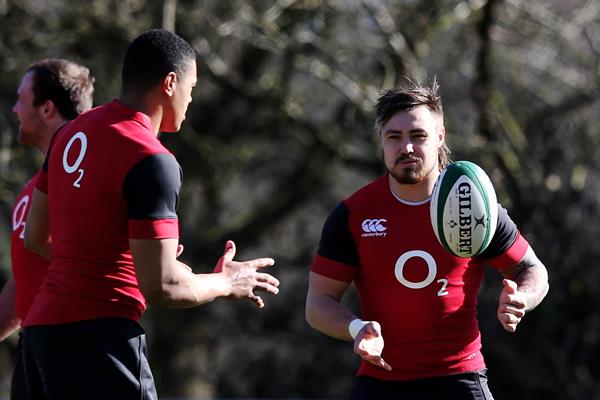 Commenting on the award, Nowell said: “Obviously I’m delighted to have been given the LV=Breakthrough Player award.  The fact that it is voted for by rugby fans makes winning a huge honour, so thanks to everyone that voted for me. It is also nice to be recognised for playing the game I love and spurs me on to keep doing what I am doing.

“This season has been amazing for me already as not only have I collected this award, but I’ve won my first England Under-20s cap and I’ve managed to break into the Chiefs first team, playing in not just the Aviva Premiership and LV= Cup, but also the Heineken Cup.”
Nowell’s says the LV= Cup has played a huge part in his development this season and that other youngsters at the club have also benefitted from the trust shown in them by the Exeter coaching staff.

He added: “It’s good that Rob, Ali and Ricky have shown faith in all of us youngsters this season. I think we’ve all benefitted massively from that exposure and I’ve used it as the stepping stone to stay within the first team.

“Playing in big games and in front of big crowds, especially at Sandy Park, is what it’s all about. I’ve been lucky to experience it a few times this season and hopefully I can get a few more opportunities between now and the end of the season.”

Nowell’s rise this term is in stark contrast to 12 months ago when the talented back was sidelined with a knee injury that not only curtailed his season prematurely, but also meant he did not travel with the England team to last summer’s Junior World Cup in South Africa.

Although gutted at the time, Nowell now believes the injury may have been a blessing in disguise as it allowed him not only to get his knee fully healed, but work on others parts of his physique and his game.

“Last season was tough, especially when I was told I would be out for a while,” he explained. “However, that spell out allowed me to do a lot of good things and I think it’s really paid off this season. I’m definitely a lot stronger, my knee is fully recovered and I’ve added a lot to my game as well.”

Nowell was presented with the award today at the Under-20s training camp in Chester by Head Coach Rob Hunter, who himself is poised to join the Chiefs next month on a full-time basis. 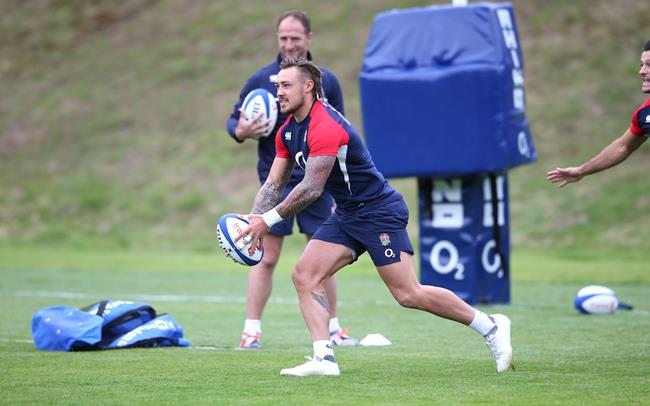 “Jack is a deserved winner of this award. He is a product of the Exeter Chiefs Academy and has been a stand out performer in the England age grade sides and his progress has been really pleasing,” said Hunter.

“Jack made his senior Exeter Chiefs debut in the LV= Cup last season and the competition continues to give young English talent a stage to showcase their talents. Since doing well in the early rounds in November, he has been a regular in the Chiefs side, highlighting the value of the competition.”

Claire Jeromson, head of sponsorship at LV= commented: “Congratulations to Jack on winning the LV=Breakthrough Player Award this season, he was up against some strong competition and should be incredibly proud. Jack and the other nominees are testament to the young talent being developed in the domestic game.

The LV= Cup continues to be vital in allowing players the chance to make their mark and recognising this through the Breakthrough Player Award is very important”.