Rob Baxter heralded his side’s ‘amazing’ on-field efforts after they booked themselves a place in this season’s Gallagher Premiership Final, courtesy of a 35-6 victory over rivals Bath at Sandy Park.

It was another vintage display from the Chiefs, whose success ensured them of a fifth successive trip to English Rugby’s HQ, where they will now face Wasps on October 24.

Two tries from the free-scoring Jonny Hill, plus touchdowns from Luke Cowan-Dickie, Stuart Hogg and Ollie Devoto, were the highlights in another hugely impressive display from the Devonians, who must now quickly regroup ahead of next Saturday’s Heineken Champions Cup final against Racing 92.

A first-ever domestic and European double remains on the cards for Baxter’s side, who weathered a strong challenge from Bath in the first period, before pulling clear after the break to set-up a re-run of the 2017 final, which the Chiefs won in extra time to lift their maiden Premiership crown.

“I thought our individual and collective effort today was just amazing,” said a delighted Baxter at the final whistle. “Probably the one thing we were concerned about this time, compared to previous semi-finals at this stage, is that we have another game to go next week. Every other time we’ve got to this stage, we’ve gone semi-final, then final. This year, we’ve had to go semi-final, final and then another final.

“With all of that, the reality was we came into today knowing we have a huge game next week and it could have been easy for them to have one eye on that and not quite commit fully to this game. In a sense, things could easily have gone wrong today, but our lads worked so hard they refused to let that happen. 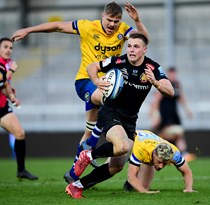 Skipper Joe Simmonds spots a gap for the Chiefs against Bath. Picture: www.jmpuk.com

“Our defence, I thought, was won us the game. Yes, we ultimately scored a lot of points, but on the whole it was that desire to defend every inch of the pitch - from our own try-line and beyond - that was just incredible.

“It was that desire, energy and drive that ultimately wore Bath down quicker than our attack. Yes, our attacks came quickly at times, but it came from the repeated effort we were willing to put in during defence. Sooner or later that all pays off and today it paid off with tries.”

Spearheading the Chiefs charge again was young skipper Joe Simmonds, who converted all five tries, during a man-of-the-match display.

Despite his tender years, he is still only 23, Baxter acknowledged there is still more to come from the young playmaker.

“He [Simmonds] still hasn’t really played a lot of rugby at this level. He is in fly-half terms, still relatively young, but all the time he’s gathering more and more experience and playing a lot of big games for us. Joe is starting to realise that he can drive things, run things how he wants, and be a threat to the opposition himself. And it’s the threat part which is the important part.

“Today, I thought he was more of a threat than he was against Toulouse and that’s the key. When he carries, when he gets his hands on the ball, and he starts pulling defences around him, that’s when he’s at his very best. As you saw, he’s really starting to come of age and he doesn’t miss kicks. Five points becomes seven most of the time and that in turn creates scoreboard pressure which makes it difficult for other teams to deal with.”

Despite seeing backs Simmonds, Henry Slade and Olly Woodburn all depart in the second half, Baxter insisted the issues were not of major concern, blaming it more on cramp, and says all three will come into contention for next weekend’s European encounter.

“I’m not overly concerned at this stage,” reported Baxter. “The guys will have a day off tomorrow, then we will be back in on Monday ready to go again. Now we’re getting back into what I call a standard week, the guys will come in Monday, Tuesday and Wednesday and will look to get everything in place for next week.

“What we have to make sure is that we get our mental and our physical energy where it needs to be, we crank into training and whatever happens after that will be down to how we perform and how we train.”