Baxter relishing another tilt at silverware

Rob Baxter accepts that Exeter Chiefs will need to get "lots of little things right" in the quest for Gallagher Premiership title glory.

The Chiefs will contest a fourth successive Premiership final, while Saracens are chasing a European and domestic double after winning the Heineken Champions Cup earlier this month.

English rugby's showpiece occasion pitches Exeter and Saracens together for a third time in the last four seasons, and Chiefs Director of Rugby Baxter is relishing another tilt at silverware.

"We are aware there are going to be challenges all over the field, and we are going to have to play very well, but we feel we are where you need to be at this stage of the season," he said. "Our performances over the last couple of weeks have shown improvement, they haven't shown tiredness or fatigue.

"There is no doubt Saracens have got good players. I am not going to sit here and say they have got a simple game-plan, because that is just so condescending, it's scary. Making things look simple comes down to working very hard and being very good at what they do.

"There is a reality that they've got guys who are very accustomed and very good at running very hard off the ball and creating momentum. You have got to get lots of little things right. There are lots of little moments we are going to have to try to win, bit by bit.

"I don't see there being one big area where we have got to get it right, I see lots of individual battles right across the field. Every second the clock is ticking, we are going to have to be very good."

Saracens beat Exeter in the 2016 Premiership final, then repeated the feat a year ago, wrestling the title off a Chiefs side that had won it for the first time through toppling Wasps 12 months previously.

Last season it was a comprehensive victory from the Londoners, who scored four tries on their way to a 27-10 success.

Baxter added: "The one thing we have focused on is not to play the game too early. Big games come around relatively rarely, and one of the hardest things to do is to get your preparation right, but without getting over-emotive about things.

"We have become way wiser. You don't need to see guys running around with frowns on their faces, slugging it out with each other every minute during the last week of the season. Yes, it's training with quality, but also being able to relax at the right time and being intense at the right time. 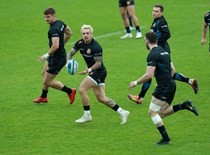 "It was nice to see them (Exeter players) upset and a bit angry last year, because that showed a progression from us as a club from the first final. Then the second year we took that next step and won, and the third year you could just tell it wasn't OK just to be there.

"We had some players who were openly quite prepared to put their hand up and say they hadn't played as well as they would have liked to play, or expected to play. What we have got to do in this final is to see how much we have moved on."