In the grand scheme of things, the result was somewhat irrelevant. Instead, the Exeter Chiefs are up and running and this pre-season work-out will serve as a useful stepping stone for the challenges ahead.

Rob Baxter’s side offered plenty in their one and only work-out ahead of the new top-flight season, but in the end they were picked off by a strong second half showing from visitors Munster Rugby.

The two sides traded blows for much of this entertaining encounter, before the Irishmen pulled clear to sink the hopes of the Chiefs on their own turf.

Jack Innard and Jack Nowell both crossed for first half scores, while Rus Tuima also got in on the scoring act for the home side. However, it was not enough to thwart a Munster outfit, who countered with scores of their own from Rory Scannell, Calvin Nash (2), Cian Hurley and Roman Salanoa.

In their first outing since the disappointment of last season’s narrow defeat to Harlequins in the Gallagher Premiership final, Baxter sent out a tried-and-trusted line-up for the visit of the travelling Irishmen.

Although shorn of a number of those who featured at HQ due to unavailability and injuries, the Chiefs were roared into action by a bumper crowd, many of whom were returning to Sandy Park for the first time since the pandemic began.

With personnel in place for the hosts, who were sporting their new Cup kit, it was a lively start for the Devonians who took just seven minutes to get their new campaign up and running.

Having used a penalty to the left corner to put them deep behind enemy lines, the home side used the resultant five-metre line-out to create the opening for hooker Innard to squeeze his way over the whitewash from close range.

Home joy, however, proved short-lived as Munster responded within minutes to get their afternoon cup and running. Like the Chiefs, they used their well-drilled pack to punch themselves to within sniffing distance of the white line, before the ball was flung back inside to centre Scannell, who bulldozed his way over for the try, converted by the boot of Healy.

Undeterred by the setback, the Chiefs quickly regrouped and they regained the lead midway through the half. Strong carries from Tom O’Flahery, then Josh Hodge, propelled them onto the front foot, before Maunder looked to go wide once more.

Munster, although alert to the danger, had flown off their line, centre Dan Goggin slapping the ball down as the home side looked set to pounce. He was dispatched to the sidelines by referee Tom Foley, who allowed Nowell to claim possession of the ball before tapping quickly and driving over for the score, which Simmonds was able to convert with ease.

It was no more than the Chiefs deserved for their efforts. They were, however, hungry for more and with No.8 Rus Tuima leading the charge, they continued to put the hammer down in attack. Munster, though, were equal to the task, producing a resolute defensive wall, whilst some loose line-out play from the home side also saw some decent attacking opportunities go begging.

Threats averted, it was the turn of the visitors to show their worth in attack - and on 27 minutes they drew level when winger Nash cut a lovely line back across the Chiefs defence to restore parity.

As half time approached, the Chiefs could - and probably should - have added to their tally, but again some gilt-edged chances went begging.

On the resumption, the Chiefs were again quickly into their stride, lock Sean Lonsdale leading by example with a heavyweight carry that set the tone for the home side’s attacking endeavours.

He was quickly joined in the Exeter engine room by Ryan McCauley, the Aussie newcomer getting his first taste of Northern Hemisphere rugby following his summer move from the Western Force.

The Chiefs continued to push forward in numbers and they thought they had regained the initiative when Innard appeared to steal over for his second score. Sadly for the Cornishman, his effort was chalked off for crossing, much to the disappointment of the natives. 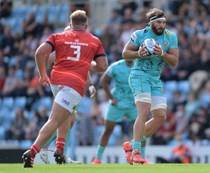 Having survived Exeter’s early assault, it was the visitors who turned defence into attack as Nash scythed his way through the middle, only to be felled just shy of the home line. Thankfully for him, team-mate Hurley was right on his shoulder, accepting the offload for the easiest of scores.

The nip-and-tuck nature of the contest continued aplenty and having fallen behind, the Chiefs responded straight from the kick-off, winning a penalty that they dispatched to the corner. Now in prime position, Baxter’s side went to work, doing what they do best, working the opening for Tuima to steal over in the corner. Skipper Simmonds obliged with the testing touchline conversion to put his side up by two.

Both sides took the opportunity to run their benches and it was one of Munster’s replacement who got them in front. With the Chiefs down a man following the sin-binning of Sam Hidalgo-Clyne for killing the ball on the line, the visitors quickly made the most of their numerical advantage to drive prop Salanoa over the line.

Crowley added the extras to that try and Munster’s fifth, which came courtesy of Nash just three minutes later. The visitors reacting swiftly to some poor play from the Chiefs to release Nash, who galloped down the right flank and in behind the posts.

Up against it, the Chiefs looked to rally in the final quarter, but try as they may, they were unable to find their way past the stubborn Irish defence who, despite being under the cosh, found enough in their reserves to hold firm.

For the Chiefs there is plenty to work on and review this coming week, but the foundations are in place for Exeter to once again have their crack on English and European Rugby’s elite.