It was good while it lasted, but Exeter’s grip on European Rugby’s major crown has come to an end after Leinster stormed Sandy Park to march into the last four of this season’s Heineken Champions Cup.

On Grand National Day, the four-time winners recovered from going 14-0 down to last year’s champions, before striding clear with a performance that will have made the remaining contenders in this season’s competition sitting up and taking note.

Tom O’Flaherty’s early double allowed the Chiefs to stride clear of their rivals early doors, before the Irish thoroughbreds hauled in Rob Baxter’s side with a display that was full of champion pedigree.

Not only were they ruthless in attack, claiming tries from wingers James Lowe and Jordan Larmour (2), but they were equally dogged in defence, not only repelling the best the Chiefs can throw at them, but forcing a string of penalties that replacement Ross Byrne was able to dispatch with aplomb.

For the Chiefs, European success will have to wait for another year, but they will no doubt have learnt another crucial lesson in what it takes to move to that next stellar level.

On a glorious afternoon in Devon, Baxter side - which showed two changes to that which had defeated Lyon a week earlier - started like the proverbial freight train. Not even three minutes had elapsed and they were dishing out a hefty blow to Leo Cullen’s visitors.

No.8 Sam Simmonds picked from the base of a scrum, before half-backs Jack Maunder and younger brother Joe, too charge. The Exeter playmaker worked his way into position, creating the opening for O’Flaherty to dart in off his wing and attack the Leinster midfield at pace.

Still with plenty to do, the Chiefs speedster initially shook off the attentions of Johnny Sexton, before ghosting between Robbie Henshaw and Hugo Keenan for the opening try.

Joe Simmonds obliged with the extras to that score and Exeter’s second, which arrived just five minutes later, the winger again slaloming his way over the whitewash after some quality, multi-phase play from the hosts allowed Henry Slade to provide the crucial pass to his team-mate to score.

It was the dream start for the Chiefs and reminiscent of what Lyon had done to the Devonians just seven days earlier at the same venue. But, just as Baxter’s side recovered against the Frenchmen, so Leinster did exactly the same here.

In their first meaningful foray into Exeter territory, the Chiefs did well to scramble back to deny Lowe of bagging an almost immediate response. Referee Mathieu Raynal was close to hand as the winger looked poised to strike, but he adjudged the ball was held up, before Jonny Hill won a crucial turnover penalty just moments later to help relieve the pressure.

The let-off, however, proved momentary as Leinster, recently crowned Pro 14 champions for a sixth time, threatened once again. This time, there was to be no reprieve for the home side, the Irish province working their way through the phases before Keenan offloaded in the tackle to Lowe, who needed no second invitation to dot down.

Irish captain Sexton slotted the conversion, but that would be his last meaningful action as he departed stage left following a heavy collision in midfield. In his place, Byrne was entrusted with the role of Leinster’s key playmaker - he didn’t disappoint!

With virtually his first touch of the game, it was his perfectly-timed pass - following more sustained pressure from the visitors - that allowed Larmour to squeeze over in the right corner just before the half-hour mark.

Byrne slotted the testing touchline conversion, before putting his side in front with two successful penalties in the final ten minutes of the half.

Baxter’s side emerged for the second period knowing they would need to up the ante, if they were to stand any chance of replicating their heroics of last October.

Whatever the Chiefs’ Director of Rugby said to his troops, they re-emerged for the second half battle, energised and once again very much on the front foot.

Just a minute had been played when Joe Simmonds drilled a penalty - given against Leinster lock Scott Fardy - into the left-hand corner. Leinster certainly knew what would follow - the trademark Exeter catch-and-drive - but, like so many others have found out in the past, knowing what is coming - and stopping what is coming - are two completely different things. 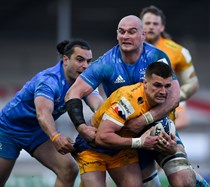 As it proved, Jacques Vermeulen took Luke Cowan-Dickie’s throw at the front of the line-out, before he was engulfed by a sea of amber-clad team-mates, all of whom amassed as one to propel Dave Ewers over for his fourth try in as many games.

Now just a point behind, it was very much ‘game on’ as these two leading lights looked to head for home.

Sadly, it was Leinster who stepped up, not the Chiefs. Their back-row trip of Rhys Ruddock, Josh van de Flier and Jack Conan were immense all game. The trio’s work at the breakdown, not only stymied the home side, but also won their own team a series of crucial penalties.

Byrne struck again to put his side back in front by a point, before the visitors landed a decisive blow just before the hour mark. Again using their forwards to power their way down field, Luke McGrath then took centre stage, orchestrating the backs move that allowed Larmour to sneak over in the right corner, this despite the best efforts of Joe Simmonds to thwart him.

Although Byrne couldn’t land the touchline kick, the Leinster fly-half was able to find his mark when French ref Raynal penalised Jannes Kirsten for a high hit on the same man.

Now two scores adrift - and with time fast running out - the Chiefs needed to throw caution to the wind. To their credit, they dug deep and having positioned themselves deep inside the Leinster 22, it seemed inevitable that the Exeter eight would somehow be able to hammer their way over from close range.

Leinster had clearly not seen that same script, instead standing firm in the midst of a powerful home assault. Exeter huffed and puffed, but they could not blow the Blue Wall over. Leinster not only held firm but, crucially, won a decisive penalty under their own posts to help clear the danger.

It was a big moment for both sides.

Clearly energised by their efforts, the visitors worked their way back down field, winning a scrum penalty that Byrne dispatched with ease to put the final nail into the Chiefs coffin.

Even then, the visitors could have added to their tally late on, but centre Rory O’Loughlin was denied a solo try with the last play of the game, the French officials picking up on an earlier indiscretion.

That, however, was that for Baxter and his Chiefs, who must now recover quickly and focus their thoughts to retaining their Gallagher Premiership crown over these next few months.