Sam Simmonds is congratulated by his Exeter Chiefs team-mates after claiming his record-equalling try against Worcester Warriors at Sandy Park. Pictures: JMP Sport

In what has already been a week to remember for Sam Simmonds, so the free-scoring Exeter Chiefs man continues to make headlines.

Not content with being one of four Chiefs named in Warren Gatland’s squad for this summer’s British & Irish Lions tour to South Africa, the 26-year-old continued his celebrations by etching his name into the Gallagher Premiership record books.

His two tries against visiting Worcester Warriors took him to 16 for the season in the top-flight, equalling the record for tries scored by forwards in a solitary campaign. Alongside Neil Back and former team-mate Thomas Waldrom, Simmonds is in stellar company.

However, the Torquay-born forward is far from finished. Now, he has the overall seasonal record (17 tries) in his sights. With four games of the regular fixtures to go, you wouldn’t bet against him putting himself to the top of the tree.

Not for the first time, he helped lead the way for Rob Baxter’s side as they overcame a 10-8 half time deficit to run out comfortable winners here at Sandy Park.

The Warriors had bagged a first half score through centre Francois Venter and five points from the boot of Jamie Shillcock, but a Henry Slade touchdown and a penalty from the younger Simmonds, brother Joe, meant just two points separated the two teams at the turn.

The second half, as it proved, belonged to the defending champions, who added 33 unanswered points in a dominant display of pure power. Dave Ewers, Stu Townsend and Jacques Vermeulen all touched down with Joe Simmonds completing the job with four conversions and a penalty.

Up against a strong downfield breeze in the first period, Baxter’s pre-match plans had to alter in the warm-up when Scottish international Jonny Gray was withdrawn from the fray. His absence meant Sean Lonsdale was promoted into the starting line-up with Will Witty added to the bench.

The Warriors, meanwhile, had no such worries and they took to the field looking to put to bed a disappointing seven-game losing streak.

Shillcock’s kick-off quickly pinned the Chiefs back deep in their 22 and although the hosts did well to repel the initial waves of Worcester attack, it was from a scrum penalty that the Warriors full-back fired his side in front.

The recalled Alec Hepburn was the man singled out by Anthony Woodthorpe for infringing at the set-piece and Shillcock made no mistake, drilling a lengthy effort from just inside the Chiefs half to give the visitors the early advantage.

Although behind, Baxter’s side were dealing with the testing elements well and with proving carriers in the form of Messrs Cowan-Dickie, Ewers, Vermeulen and Sam Simmonds in their ranks, they were happily soaking up the minutes and the territory without really making any real inroads.

Worcester, though, were playing their part in an attritional opening quarter and when they once agin sent up a high kick, fielded by Scotsman Stuart Hogg, it was Shillcock and Perry Humphreys who pounced on the Chiefs full-back, winning turnover possession which they used to deadly effect.

Flicking the ball out of the turnover ruck, it was Warriors skipper Ted Hill, who offered the timely pass for Venter to step back inside, shaking off Slade in the process, before touching down for the try, which was masterfully converted by Shillcock.

Ten points adrift, the reigning Premiership champions needed to summon a response of sorts fast. This they did, England international Slade scooping up a grubber kick in behind from Venter, before kicking ahead and winning the sprint to the line between Fin Smith and Hill to claim his side’s first points of the day. 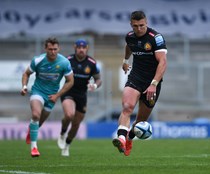 Although Joe Simmonds failed to add the extras to the score, the Chiefs skipper was able to cut the deficit just before half time when his pack of forwards combined as one to win a penalty under the Warriors posts. He dispatched the kick with aplomb and the home side were only two adrift at the break.

The penalty had been a timely boost for the Chiefs, who resumed for the second period in much the same attacking vein. With Luke Cowan-Dickie restored to the action following a brief HIA check, the newly-named Lion was quickly at the heart of the matter as he and his team-mates looked to take control.

In truth, it took just five minutes for the home side to make their mark. A trademark run from Ollie Devoto saw him held just shy of the whitewash by an excellent, last-gasp tackle from Hill, but when the Chiefs recycled around the corner, it was Ewers who was propelled under the posts for his fifth try of the season.

In front for the first time, now the Chiefs were looking to show their worth. A brilliant cross-field kick from Joe Simmonds caused Shillcock to clear the danger, but a superb return from Hogg, then Nowell, saw the Cornishman held up just shy of the line.

Within sniffing distance of the white line, the Chiefs looked to go again off the resultant scrum. A series of close-range raids were halted, as was Tomas Francis who, after a series of TV checks, was deemed to have been held up on the line.

But undeterred, the ‘Men in Black’ do what they do best, reverting to type and working the opening for Sam Simmonds to barge his way under the sticks. Younger brother Joe added the conversion to make it a full house for the home side.

Baxter quickly threw on fresh artillery in an attempt to get the all-important bonus point - and with a new look front-row, coupled with the addition of Stu Townsend and Ian Whitten, it quickly had the desired effect as the Chiefs once more set-up camp behind enemy lines.

With the Warriors continuing to concede a steady flow of penalties, the patience of Woodthorpe finally wore thin when flanker Sam Lewis was sent to the sidelines for a ten-minute. Up a man, it took less then two minutes for the Chiefs to make it pay, Simmonds crossing for his second try and his 16th of the season in the top-flight.

Worcester, to their credit, continued to offer a decent enough resistance and Venter was unlucky not to grab a second try, when he was held up on the line by Joe Simmonds. However, it was the Chiefs who finished with a flourish, adding two more tries.

With GJ Van Velze the second visitor to be sent to the sin-bin, the home side made the numerical advantage pay as first Townsend squirmed over from close range, before Vermeulen rounded off proceedings with a late score.

The victory lifted the Chiefs back into the top two, but their joy was soured somewhat with the sight of Jack Nowell coming off in the second half with an injury that didn’t look all that great on initial viewing.