This didn’t end up quite the canter it looked as though it was going to be after 30 minutes, but Exeter Chiefs were able to close the gap on Gallagher Premiership leaders Bristol Bears with this seven-try victory over visiting Leicester Tigers.

For so long the main frontrunners in English Rugby’s top flight, these days Leicester have sadly slipped into the bracket of Premiership also-rans. In their place, the Chiefs have galloped ahead of them, winning not only two Premiership titles, but also a European crown as well.

This season, Rob Baxter’s defending champions are continuing to set a fast pace at the summit, claiming their 10th league win of the campaign and inflicting yet another loss on Steve Borthwick’s Tigers, who had arrived in Devon fresh off the back of their first away league win in almost two years at Gloucester last time out.

However, the visitors - who had made wholesale changes to their starting line-up - were unable to handle a blistering opening from the Chiefs, who had clearly heeded the words of Baxter and the need to come out all guns blazing.

Jack Innard, Sam Simmonds and Jacques Vermeulen all threatened early on, before the Chiefs finally made their breakthrough with 11 minutes on the clock. A penalty into the corner set-up a five-metre line-out, which Innard threw long to Ollie Devoto. The England international collected on the burst, made decent inroads, before Dave Ewers and Vermeulen took up the charge.

Although the Tigers did well to repel the double threat of Exeter’s African-born bulls, they could do little to thwart prop Harry Williams from burrowing over for the opening try, which Joe Simmonds converted with ease.

It was the ideal start for the Chiefs, who were then given a numerical advantage just moments later when Leicester lost Kobus Van Wyk to a red card. Following up on a kick deep into the Exeter half, the winger became the latest addition to the Premiership’s rising list of bad-boys, as the officials adjudged the South African to have hit Jack Maunder with a high shoulder to the head.

Almost immediately the Chiefs came within a whisker of claiming a second try through Olly Woodburn, but the Exeter winger was denied by a great cover tackle from Tigers centre Matt Scott.

Still with the bit between their teeth, though, the hosts continued to pile forward in numbers. Indeed, with 20 minutes on the clock, their territory and possession stats were already in the 80s, and it came as no surprise when they added a second through Tom O’Flaherty.

Ewers and Sam Simmonds laid the foundations with some heavyweight carries, before the home backs took charge, working the opening for the London-born speedster to arc his way round the Leicester defensive line and trot over for his fourth of the season.

Skipper Joe Simmonds added the extras to that score and Exeter’s third, which arrived just before the half-hour mark. With Dan Kelly sent to the sidelines for a ten-minute stint following a blatant professional foul, Maunder used the resultant penalty to tap quickly to Ewers, who propelled his way over from close range.

Already it was looking ominous for the Tigers, whose last victory at Sandy Park came way back in 2014. The Chiefs, though, were in no mood for letting up and they had the all-important bonus point in the bag just minutes later when Sam Simmonds, Exeter’s prized thoroughbred, opened his stride to race down the left flank, before slipping a sublime offload inside to Harvey Skinner, who waltzed over for his maiden Premiership try.

Four tries safely secured, the Chiefs were seemingly romping towards a heavy scoreline. Leicester, though, had other ideas and - to their credit - they regrouped well in the ten minutes before the break to claim two tries of heir own. 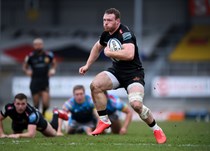 Exeter No.8 Sam Simmonds leaves a trail of destruction behind him on the way to the try-line. Picture: JMP Sport

Skipper Hanro Liebenberg was the creator for their first, picking up from the base of a scrum before producing some nifty footwork that would have been more akin to Strictly, rather than the Sandy Park turf. The South African, though, did well and when he offloaded to team-mate Freddie Steward, the full-back darted towards the line, only to be halted by a last-gasp tackle from O’Flaherty.

In the ensuing follow-up, the Chiefs were unable to scramble sufficiently and it was the Tigers who used a quick tap penalty to work the opening for Argentinian lock Tomas Lavanini to cross for the score, converted by Zack Henry.

Then, with the last action of the half, a soft penalty award against the Chiefs allowed Henry to once more pin his side back into the home 22. This time, the visitors used the set-piece to rumble to within sight of the line, before scrum-half Jack Van Poortvliet took charge, selling an audacious dummy to dive over for the score.

The late resistance had given the Tigers a glimmer of hope as the second half got back underway, but that was soon doused within three minutes as the Chiefs came out firing once again. Hard-running from Devoto, then Maunder, got Baxter’s side on the front foot and with advantage in their hands, it was Joe Simmonds’ clever chip kick over the top that was gobbled up by older brother Sam, who was able to touchdown for his 14th try of the season.

Seemingly with only pride to play for, Borthwick’s Tigers threw caution to the wind. Indeed, using a penalty advantage of their own, they worked their way through a catalogue of attacking phases deep inside the Chiefs half, before the ball was worked out to Scottish international Scott, who skipped his way through a gap in the home defence for the try, converted by replacement Jonny McPhillips.

Winger Olly Woodburn crosses for his try against the Tigers. Picture: Getty Images

Again, though, the home response was quick and emphatic as they added a sixth score. Full-back Facundo Cordero set the tone, hot-stepping his way through a clutch of tackles, before the ball was worked back inside through a plethora of different hands, Ewers eventually providing the scoring pass for Olly Woodburn to cross in the corner.

The new dad celebrated in style, cupping his arms in a baby-swinging motion, in a dedication aimed towards his son Solomon.

Fresh faces from the bench were added by the visitors and that new injection of on-field life had the desired effect as they hit back with two more tries. Hooker Charlie Clare was the first over from a well-drilled, catch-and-drive move; then Liebenberg added a fifth when he latched onto a loose ball to charge down the right wing and score.

Suddenly, Exeter had gone from cruise control into panic mode with just nine points now separating the two teams. The Tigers were all of a sudden energised and very much in the contest. The Chiefs, on the other hand, had gone quiet and in desperate need of a pick-me-up.

However, the sight of Cordero being binned for a deliberate knock-on did little to ease home concerns as the game headed into the final ten minutes.

Thankfully, the Chiefs were able to swallow the loss of their Argentine flyer, turning defence into attack masterfully, and working the opening for Vermeulen to crash over in the right corner. Simmonds banged over the testing touchline conversion to ensure his side were able to cruise down the final furlong with relative ease.