Cowan-Dickie Scores for the Lions

Luke Cowan-Dickie & Stuart Hogg have been selected in the starting 15 for the British and Irish Lions as they take on the Springboks this Saturday in Cape Town.

They will form key members of a Lions team looking to triumph over the World Champions for the first time since the iconic tour of 1997, and the test starts are just reward for their fantastic International and Domestic form over the past 12 months. For Hogg, this marks a wonderful opportunity to make his mark on a test series after suffering a cruel injury on the 2017 tour that ruled him out of the series, and travelling as the youngest player of the squad in 2013. 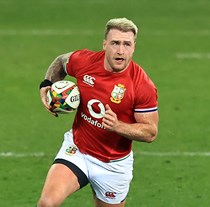 The Lion's will be captained by Alun Wyn Jones, who has made a remarkable comeback from a shoulder dislocation to win a tenth successive test cap, and resume his 2017 partnership with Maro Itoje in the second row. Elsewhere Ali Price makes a first test start at scrum-half, partnering with Dan Bigger at half backs, and Jack Conan takes the number 8 shirt after impressing in the physical battles that the South African sides have posed.

Gatland said "“In my four Tours as a Lions coach, this was by far the hardest test selection I have been involved in," and it's a testament to this challenge that there are very few 'tried and tested' partnerships within this starting 15.

“While the stands will be empty in Cape Town Stadium, we know Lions fans from across the home nations will be cheering us on back home. We’ll do our best to get the win.”

The appearance of two Chiefs players in the starting test side reflects the progress that has been made by an Exeter side that rose to the pinnacle of European Rugby in 2020.  With Jack Nowell featuring on the 2017 tour, and now Cowan-Dickie and Sam Simmonds touring this year, it is clear evidence that the academy pathway is working well in the South West and the talent in our region is as strong as ever.

We will be hosting a screening at Sandy Park to mark this momentous occasion as two Chiefs players take the field wearing the famous red test jersey for the first time. Click here to find out more and book your seat now!