Chiefs side to face Munster

Exeter Chiefs Director of Rugby Rob Baxter says he and his players are relishing the chance to get their new season up and running tomorrow against Munster. Picture: JMP Sport

With the new 2021/22 season looming large on the horizon, Exeter Chiefs will wrap up their pre-season plans with the visit of Munster to Sandy Park (3pm).

After weeks of hitting the gym, pounding the training field and the occasional fitness session on the beach, it’s on-field matters that will take centre stage for Rob Baxter’s side, who kick-off their Gallagher Premiership campaign next week with testing trip to Leicester Tigers.

It will be the Devonians one and only test ahead of the new season, but it’s a challenge Baxter and his players are clearly relishing as they look to put the frustration of June’s Premiership Final defeat firmly behind them.

“I’m genuinely looking forward to getting going,” said Baxter this week. “I say it at the start of every season, I don’t know quite where we are, but from what I’ve seen I think we’re okay. Looking at the squad, we’ve got virtually a full-strength backline; the front-row looks good as well; it’s more in the back five where we are a little bit scratchy.

“Every coach will tell you when you start having a few injuries they seem to come one after another in the same positions, so the back five of the scrum is a little bit of a challenge for us. However, it is going to be a great opportunity for a few of those guys who didn’t play a huge amount last season or those young players who are looking for an opportunity, to really go out and stake a claim for themselves.

“What I’ve said to all the guys during this pre-season is that we are starting afresh and now this is the time for you to grasp your opportunity. What I will be looking for is for people to stand up and deliver. I want to look at this group and see which of those players want to go out there and lead us.

“I say that because if we want to win games and we want to achieve things, we can’t have just two or three players who lead, we need a lot more leaders of things, on and off the field. That is what will create us momentum and what will set the standard to pull people forward.”

With relatively little comings and goings at Sandy Park this summer, Baxter will involve summer recruits Sam Nixon, Josh Iosefa-Scott, Ryan McCauley and Sean O’Brien in his match-day squad against the visiting Irishmen.

“Having Munster here is probably exactly what we want going into the new season,” added Baxter. “Weirdly, tomorrow’s result is not massively what I am looking for, it’s more that we have guys who are willing to stand up and fight, because it’s that which ultimately decides how you get through those first few weeks of the season – and how it sets the tone for what you want to do.”

With new rule variations also coming into play this season, tomorrow’s test will allow the Chiefs to find tune their work ahead of the start of the top-flight.

“We’ve been working on a few new things, as you do every season,” explained Baxter. “Munster, as I said, will be a good test for us. We know they will be one of those teams who will be there or thereabouts in their division, so I think Saturday will be quite a big occasion, especially as we have a big crowd coming in.”

Tickets for tomorrow’s game are still available,CLICK HERE to purchase 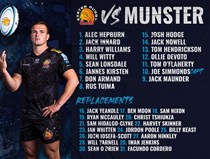