They say lightning doesn’t strike twice, but it proved to be a second superb victory in a matter of weeks for Susie Appleby’s side as they backed up their victory over Saracens last weekend with a gutsy 7-6 victory over Allianz Premier 15s table-toppers Harlequins.

In a scrappy game where defence was king, a solitary early score for McKinley Hunt, converted by Gabby Cantorna proved to be enough, as Harlequins could only muster two penalties from fly-half Ellie Green.

Ahead of kick-off, head coach Appleby was determined for her team to build on last weekend’s victory, keeping faith with the same starting XV that had been so effective against Saracens. Indeed, the only two changes to the match-day side saw Abbie Fleming and Kayleigh Armstrong named on the bench.

For Harlequins, it has been seven weeks since they last tasted competitive action, so it was to be expected that there may be some rustiness in their play.

On a crisp Exeter afternoon, the Chiefs came out of the blocks firing as they struck after just three minutes. After several initial bursts from the pack, Harlequins went off their feet at the breakdown, allowing Cantorna to kick her side into the visitors’ 22.

The line-out throw may have evaded all of the Chiefs lifters, but prop Olivia DeMerchant mopped up well at the back to crucially keep the ball in her side’s possession. After a strong initial surge by Sachiko Kato, Hunt crashed through a gap in the Harlequins defence to cross the line near the post. Cantorna’s conversion opened up an early 7-0 advantage for the hosts.

As the first half continued, the Chiefs looked to continue to try and open up the Harlequins defence, Flo Robinson again controlling things from scrum-half. However, for all their adventure, passing and accuracy sadly let them down, with a number of knock-ons allowing Harlequins to relieve the pressure.

Flanker Kate Zackary leads the charge for the Chiefs

In turn, it allowed the Londoners to set up camp in the Chiefs 22. They too huffed and puffed in attack, but their inaccuracy – coupled with some strong defensive pressure from the Chiefs – allowed the home side to turn over the ball.

As Harlequins continued to pressurise the Chiefs defence, Linde van der Velden’s side started to give away several penalties, Ellie Green opening her side’s account from just outside the Chiefs 22 as the hosts were caught offside.

This didn’t seem to phase the Chiefs though, as they got straight back into their attacking structure, drawing a penalty from the Harlequins defence for not releasing. Sadly, Cantorna’s penalty attempt had the distance but, not the accuracy, as it cannoned back off the post, leaving the score still at 7-3.

The rest of the first half seemed to move in fits and starts, as both defences looked to get on top of each other. For all Harlequins’ possession and territory in the Chiefs half, they failed to capitalise on their opportunities, as Exeter continued to employ the double tackle to great effect.

Ill-discipline continued to creep into their game though, allowing Green another shot at the posts. She was unable to add to her side’s tally though, as her penalty attempt also clattered the uprights.

However, afforded another shot at the target, Green made no mistake moments later, as from a similar position to that of her earlier miss, she coolly slotted her second of the afternoon and reduce the deficit to just a solitary point.

Back within a point, Harlequins were pressing hard and they camped themselves on the Chiefs line and hounded around the fringes looking for a try. It proved to be exactly the same outcome as last weekend against Saracens though, as the Chiefs defence held firm, forcing several turnovers in an unrelenting five minutes that saw Harlequins repeatedly knock on the door of the Exeter try line without any reward.

The early exchanges in the second half set the tone for a scrappy and nervy second period, as both teams struggled to get any forward momentum in the face of niggly defences. With both sides struggling to break down the opposition and play taking place between the two 10m lines, it came down to a battle at the breakdown.

As time continued, so did the niggle between both sides as tempers flared. Michaella Roberts was penalised for a tackle off the ball on Emily Robinson, but every time Harlequins set up camp in the Chiefs 22, the defensive riposte from Appleby’s side stopped them dead in their tracks with Poppy Leitch and Kate Zackary constantly causing chaos at the breakdown.

Harlequins continued to pepper the Chiefs back three with a series of challenging kicks, outside centre Lagi Tuima’s thunderous boot keeping the hosts pinned in their own half. Every time though, Merryn Doidge was up to the challenge in a composed performance under the high ball from the young full-back.

After making her debut last weekend, Rachel Johnson again added a massive impetus from the bench with some strong tackling and timely turnovers. As Harlequins looked to free themselves up, her excellent read of Scott’s pass to Rachael Burford, forced Harlequins into retreat and alleviated the pressure.

With little over five minutes to go, Harlequins received a red card as flanker Emily Robinson caught Roberts over the head with a swinging arm tackle that left the Chiefs replacement laid out on the floor. After a stoppage in play to tend to Roberts, there was plenty of relieved faces as she was able to leave the pitch on her own two feet.

As time ticked away, Chiefs looked to keep their composure as they wound down the clock, Robinson keeping calm as those around her looked for clarity. Up against ferocious tackling from the visitors, Appleby’s side held their nerve, before Robinson hammered the ball into touch to secure a gritty and determined victory. 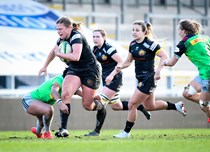