Exeter Chiefs players celebrate a famous away-day victory over Gloucester in Round Seven of the Gallagher Premiership. Picture: Getty Images

Rob Baxter picked up an early Halloween treat as his Exeter Chiefs side returned to winning ways with a gutsy away-day victory against Gloucester at Kingsholm.

A spirited second half showing from the Devonians banished the demons of the previous week against London Irish, propelling them to a third successive win on the road - and up to fifth in the Gallagher Premiership standings.

Tries from forwards Alec Hepburn and Will Witty, coupled with two penalties from the boot of Harvey Skinner, proved enough to deny a stubborn Gloucester, who led 13-6 at the break thanks to a converted Jack Singleton score and two kicks from the boot of Adam Hastings.

It was, however, the manner of the victory - one which was packed with a steely determination and a willingness to fight for everything - that will have pleased Baxter the most.

Defeat at home to the Exiles last weekend meant for the first time in five years, the Chiefs were not amongst the Premiership’s top three after six rounds. Instead, they arrived at Kingsholm in sixth place, 12 points off the pace of leaders Leicester Tigers.

Baxter, though, was not overly concerned in his pre-match chatter, focusing on the positive statistic of three wins in four games and a Chiefs outfit showing more positives than negatives.

Certainly, they started this encounter on the front foot, taking just three minutes to open their account for the night when fly-half Skinner - one of seven changes made to their starting line-up - kicked them in front with a penalty after home flanker Ruan Ackermann had been penalised for not rolling away. 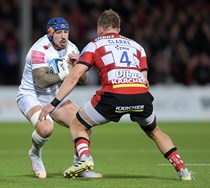 Moments later and the Chiefs were doubling their tally, Skinner adding a second successful kick after the home side were pulled up by referee Christophe Ridley for infringing in front of their own posts.

It was just the start Baxter would have craved from his side, who came within a whisker of adding further reward when Skinner - this time from just inside his own half - narrowly failed with a third short at the target.

It was a let-off for the Cherry & Whites, who having used the restart to have a few words under the posts, regrouped to deadly effect. With their forwards offering a powerful attacking arsenal through the middle, they drove themselves down field winning a succession of penalties of their own.

Unlike their rivals, they opted for a kick to the corner. The initial thrust was repelled, albeit illegally by the Chiefs, so they had another crack, quickly followed by another.

And it was from their third attempt that Gloucester struck gold, the home pack working as one to propel hooker Singleton over for the night’s opening try, which was converted by Scottish international Hastings.

Ignited by not only the score, but also a boisterous home faithful, Gloucester continued to rule proceedings. A succession of bone-crunching double hits stymied the Chiefs on at least three occasions, whilst in attack they were doing enough to force the Devonians into infringing.

Hastings banged over a penalty to extend his side’s lead, before he added a second - aided by some mouthing off by Harvey Skinner - to put his side seven points clear.

To their credit, the Chiefs rallied well and as half time approached, it was Baxter’s side who were dominating both possession and territory. Jack Nowell went close to crossing in the right corner following some sustained pressure, before Sam Skinner was bundled into touch just inches from the line with the last action of the half.

On the resumption, it was Gloucester who were first to show, Andrew Davidson producing a powerful carry through the middle, before the ball was worked to the right to winger Santiago Carreras, whose grubber in behind was well marshalled into the dead ball area by Nowell.

If that was the best of the Cornishman in defence, Nowell was quickly showing his prowess in attack as he helped to release Hogg in space through the middle. The Scottish captain made decent inroads, before he was powerfully chopped to the floor by a crucial tackle in midfield.

It was end-to-end stuff from both sides, but it was Gloucester who were upping the tempo as the Chiefs looked to man the barricades. Wave upon wave of attack was reigning down from the hosts as they looked to bludgeon their way to the try-line.

The Chiefs were holding firm under mounting pressure, but having soaked up all Gloucester could throw at them, they struck with the perfect counter punch. Turning possession over just inside their own half, a slick backs move released Tom Hendrickson and Facundo Cordero down the left, before the cavalry - in the shape of Hepburn - took up the charge to burrow over for the score.

Skinner failed with the conversion, then a penalty, much to the amusement of the packed ‘Shed’, who offered no sign of sympathy with a chorus of donkey noises.

The young playmaker was not only duly fazed and instead watched on as team-mate Sean Lonsdale threatened the home line shortly after, bursting off a line-out to charge down field, only to be felled deep inside the home 22 by a brilliant cover tackle from Carreras.

At the other end, home winger Louis Rees-Zammit was denied a certain score by some last-gasp heroics from Hogg, whose clearance down field just moments later - spilled by his fellow British & Irish Lions tourist - gifted the Chiefs possession and territory deep behind enemy lines.

It was a chance made out of nothing, but in many ways summed up the fighting spirit of the visitors, who were clearly more sprightly and spirited in every action they were performing.

With the platform created courtesy of a five-metre scrum, replacement Sam Hidalgo-Clyne sniped off the back of the set-piece, only to be flattened by a double hit as he headed towards the line. Following up in hot pursuit, though, were his pack of forwards, who between them fashioned the opening for Witty to cross for his third of the campaign.

Back in front thanks to the try-scoring exploits of the former Falcon, the Chiefs were hell-bent on ensuring their efforts would not be in vain. Ian Whitten was a lively contributor coming on in the final quarter, whilst the efforts of others all helped play their part.

Gloucester, though, were refusing to concede themselves and when afforded a late penalty to the corner, the home fans sensed this could be the moment to strike a decisive blow on the Chiefs. The line-out was duly collected and started to inch forward, but it was the outstanding work of Don Armand in the close exchanges that proved pivotal.

The England international used all of his experience and guile to not only get himself into the thick of the trundling maul but, crucially, got his hand on possession, helping to bring the drive to the deck. Referee Ridley was quick to acknowledge his efforts, awarding a penalty to the Chiefs.

To a man, the Exeter collective celebrated in unison, sparking scenes of delight both on the bench, the coaches booth and the terraces. It wasn’t pretty, but it mattered not. It was a key moment in a season which is sure to throw up more thrills and spills. 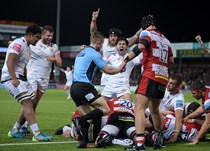