Exeter Chiefs head coach Ali Hepher has praised the ‘fighting qualities’ of his side after they made it three successive victories in the Gallagher Premiership with a 26-3 victory over London Irish at Sandy Park.

Last season’s champions pulled to within a point of league leaders Bristol Bears by brushing aside the challenge of the visiting Exiles, who had arrived in Devon on the back of a five game unbeaten streak themselves.

In a defiant display, however, it was the Chiefs who ruled supreme as tries from Sam Simmonds (2), Dave Ewers and Alex Cuthbert paved the way for their latest success.

For No.8 Simmonds, it took his tally of tries to 11 for the season, a Premiership record in itself after just nine games. However, his double also saw him move to the club’s leading try-scorer in the top-flight, overtaking Thomas Waldrom’s tally of 41. 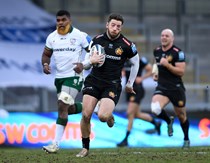 Chiefs winger Alex Cuthbert was on the scoresheet again in their win over London Irish. Picture: www.jmpuk.com

Hepher admitted afterwards that the Chiefs could - and probably should - have added to their end tally on the day, but it was in defence where he offered the most positive feedback.

“The most important thing is that we are fighting,” he said. “Today, we were up against a side who are very organised, yet we managed to disrupt them and get scores on the board that we probably haven’t been converting in the past. Yes, we probably left a out there, but it’s a work in progress.

“What we have shown over these last few weeks is that we’re willing to fight really hard for our victories and that’s meant we have deserved to win on each occasion.”

Having reset their goals following last month’s enforced break in action, the Chiefs have responded in fine fashion with victories over Worcester Warriors, Newcastle Falcons and, now, London Irish.

Hepher has been delighted with the response of his squad, adding: “We knew we were a little bit off around Christmas time. As coaches, we knew it may come, but the lads are human and we’ve reset ourselves and we’ve addressed what we are about and what we stand for.

“The pleasing thing about the last three weeks is that it’s not been easy - and we’ve not made it easy at times - but we have scrapped our way through. Again, we’ve done that today, but there were no tries and that shows how much we are willing to fight for one another in defence. It’s important now to build on those foundations.”

As has been the case for much of this current campaign, England international Simmonds again led the Chiefs charge, bagging a try in each half on his way to another stellar performance.

“Sam’s a phenomenal ball-carrier, who has that pace and that stepping ability,” said Hepher. “Obviously, the guys have to help put in those positions - and he has to take them - but if you give him half a gap, he will capitalise on that because of the pace he has in his game.”

Equally, Wales and British Lions flyer Cuthbert has been in try-scoring form since his return to action from a long-standing calf problem.

Hepher has made no secret of the fact he wants to see more of the 30-year-old winger in action - and he’s been thrilled with the way he has returned to the first-team fold.

“It’s never in doubt what Cuthy can do,” added Hepher. “You see it every time he plays. He’s big, he’s competitive and he knows how to finish - he’s everything you want in a winger!

“For us, though, it’s important we keep him on the field, so we will have to carefully manage his load. What you saw last week [at Newcastle] and again today is what he is all about. His try in the second half was probably the crucial momentin the game, so we’re really pleased to see him running around like that.”

Next up for the Chiefs is Saturday’s visit of Northampton Saints to Sandy Park and Hepher is expecting another stiff examination for his team.

“Like ourselves, they have a bit of confidence about them,” he warned. “They’ve been going well and slowly creeping up the league. They are now in touching distance of that top four, so it should be another cracking Premiership game.”