Rob Baxter believes the Gallagher Premiership will be as ‘tough as ever’ following the announcement of the new 2021/22 fixtures announced today.

Baxter’s Exeter Chiefs side will kick-off the new campaign on Saturday, September 18 when they face Leicester Tigers at the Mattioli Woods Welford Road Stadium (3pm).

It’s one of three mouth-watering top-flight fixtures that BT Sport will screen during an action-packed first round of action, which kicks-off with Bristol Bears playing host to newly-promoted Saracens on Friday, September 17 (7:45pm).

Exeter’s first home fixture at Sandy Park – a fixture its hoped will be played out in front of a capacity crowd for the first time since March 2020 – will be the visit of Northampton Saints on Saturday, September 25 (3pm).

A week later, the Chiefs take to the road again, this time to Manchester where Sale Sharks – the side they defeated in last season’s semi-final – will be lying in wake on Sunday, October 3 (3pm) in another televised clash.

With the elevation of former champions Saracens back into the league, the Premiership will for the first time since it started in 1997 be contested by 13 teams. This means that each club will have two ‘bye weeks’ in the season.

In the case of the Chiefs, the first of those weekends will be Boxing Day with the other coming later in the season on the weekend of April 29/30/31.

Commenting on the release of the fixtures, Baxter said: “I think every year we say the same, which is the league looks as tough as ever. I look at our first three fixtures and you say ‘that’s a big old start to the season’.

“The one thing we saw across the division last season was that it was a very competitive league and I’ve no doubt it will be exactly the same this time around. As players and coaches, you want that challenge though.

“Going to Leicester first up, it’s a good test for us and a team we always like facing, especially up there with what could be a full house back at Welford Road. After that, we’ve got Northampton and Sale back-to-back. We saw at the end of last season the threat they posed to us in those games where we had to work incredibly hard to get those victories. Add into the mix the return of Saracens, who will create a whole new dynamic, plus the other teams, I think it all makes for what will be another hugely exciting, but highly competitive season for everyone.”

The Chiefs will warm-up for the new season with a home friendly against Munster at Sandy Park on Saturday, September 11 (3pm).

Tickets for all home games will go on sale via the club’s website tomorrow. 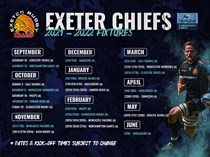