Two games in, ten points out of ten!

It’s not been a bad rugby restart for the table-topping Exeter Chiefs, who underlined their title credentials in the Gallagher Premiership with another powerful display against fellow play-off challengers Sale Sharks.

In what was supposed to be an acid test for Rob Baxter’s side, they came through it with flying colours thanks to tries from Sam Simmonds, Jacques Vermeulen, Stuart Hogg and Luke Cowan-Dickie.

Sale, meanwhile, will go back to the drawing board having now lost both games since the league resumed. For 40 minutes at least they looked the threat many expect them to be, bagging tries through Tom Curry and Robert du Preez, who slotted the conversions to both.

After the break, however, they struggled to match the power, pace and precision of their rivals.

Having resumed their campaign with victory over Leicester Tigers last week, Baxter saw little reason to tinker too much with his winning formula. Up front, Ben Moon and Jacques Vermeulen were both added, while behind Alex Cuthbert was back in action for the first time since injuring his shoulder in the Champions Cup clash away to La Rochelle in November.

The Sharks, undone at Harlequins in their first game back, made just one change to their starting line-up, replacing former Chief Sam Hill in the centre with Sam James.

With personnel in place and conditions nigh on perfect, it was the visitors who produced a dream start to this top-three showdown.

Instigated with a charge down the right from Cuthbert, the Chiefs worked the ball back inside from the touchline to Henry Slade, whose clever switch of direction released Olly Woodburn on the charge. The winger tore through the heart of the Sharks defensive line, before shipping the ball left to Sam Simmonds, who won’t get an easier finish this season.

Sale’s response, however, was swift and they restored parity within minutes through their first meaningful foray into Exeter’s 22. Using a close-range line-out, they initially attempted to drive through the pack, before it was fed out to new signing Manu Tuilagi.

Still with plenty to do, the England international bulldozed his way through three Chiefs tacklers, before skipper Jono Ross took up the charge. Although he was held just shy of the line, Tom Curry was close at hand to burrow over the score.

Fly-half du Preez converted that score and his own which followed on 10 minutes when he produced a powerful burst through the middle, brushing off a string of Exeter defenders to touchdown one-handed.

It was a punchy, one-two from the Sharks who were looking to inflict further punishment on the league leaders. Other sides could well have bowed under the pressure, but the Chiefs regathered their composure and were soon back into their rhythm.

Vermeulen and Dave Ewers carried one particular threat, only for the lively Curry to turnover possession from the former deep inside the home 22. Undeterred, though, the Chiefs continued to press forward and on the stroke of half time they reduced the deficit to just four points when Joe Simmonds slotted a penalty from in front of the sticks. 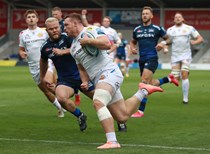 Chiefs No.8 Sam Simmonds races over for Exeter's opening try

It had been an absorbing, hard-fought opening half, and more of the same was expected on the resumption. It was Sale, however, who grabbed the first points, du Preez landing a similar kick to that of Simmonds when he punished Ian Whitten for not rolling away at the tackle area.

Hardly the start the Chiefs would have wanted, they made light of the issue and responded with a powerful offensive that will have made their top-flight rivals sit up and take note.

Cowan-Dickie’s close-range, tap penalty, attracted a swarm of home defenders just inches from their line, before Vermeulen – close at hand – picked up and spotted a mis-match with fellow countryman Faf de Klerk to burrow over in the left-hand corner. Simmonds slotted a sublime touchline conversion to level the game up.

It was typical, no-nonsense forward play from the visitors. Often Baxter’s men are accused of landing all their points from the so-called ‘red zone’. Well, that’s true to some extent, but when you’re as efficient as the Chiefs at doing it, why not play to your strengths.

However, for those who wish to see more free-flowing fair, the Devonians also have some of that in their locker as well. Hogg claiming his second try in as many games when he rounded off a slick handling move instigated by Messrs Maunder, Slade, Simmonds and Woodburn, the latter of whom offered the scoring pass for the Scotland captain to scorch over.

Stuart Hogg celebrates with Alex Cuthbert after scoring his try

Although Simmonds narrowly missed adding the extra two points, he showed his range just before the hour landing a lengthy penalty after home prop Coenie Oosthuizen had been pinged for dropping a scrum.

Now two scores clear, the Chiefs were given further impetus when, from the restart, Sale lost Curry to a yellow card, the all-action, open-side binned for a late hit on Hogg as he attempted to clear his line.

Down a man and having been pinned back deep inside their own half, the Chiefs continued to apply a sustained squeeze on their hosts. With another penalty just metres out, the Sharks knew exactly what was coming when Cowan-Dickie set himself to tap-and-go, but they could do not to prevent the Cornishman from burrowing over for the bonus pont score, converted by Simmonds.

To a man, the Chiefs bench jumped from their seats, punching the air in delight at the efforts of their colleagues. Sale, on the other hand, were already looking to the future as they withdrew a number of their frontline stars.

To their credit, the Sharks continued to offer a form of resistance and with two minutes remaining, they got their reward when Solomona snuck over in the left corner following a pass from fellow winger Marland Yarde.

Exeter’s job, though, had already been done and they were now readying themselves for Tuesday’s local derby with Bristol Bears at Ashton Gate.