Exeter Chiefs Women saw their hopes of edging into the Allianz Premier 15s play-offs ended as they were undone at the death by Sale Sharks Women.

Holly Bawden’s interception score – with the last play of the game – meant it was the Sharks who prevailed in this penultimate game of the season at Haywood Road.

Bawden’s effort, along with a try from Lisa Neumann and seven points from the boot of the experienced Katy Daley-McLean, proved enough for the hosts to sink Susie Appleby’s Chiefs, who replied with a converted Sachiko Kato try and a penalty from Gabby Cantorna. 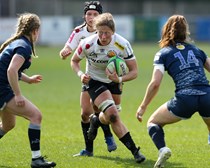 Heading to the North West after a two-week break, it was the Sharks who offered all the early bite, as Chiefs lack of discipline allowed the hosts to camp themselves in the 22.

The Sharks thought they were in after just four minutes, with Daley-Mclean marshalling proceedings with aplomb from fly-half, her grubber kick through grounded under pressure by Niamh Terry to halt the onrushing Neumann.

It was a let-off for the Chiefs, but the Sharks continued to keep their rivals hemmed into their own 22 – and they edged themselves into a 3-0 lead after Daley-Mclean slotted a straightforward penalty from in front of the posts.

Exeter’s response, however, was immediate, as the Sharks failed to deal with a Patricia Garcia restart and were caught offside. Up stepped American international Cantorna to nudge over a simple penalty to restore parity.

Up and running, the Chiefs were now starting to find their rhythm and they thought they were in for a first try after just 20 minutes. Strong pressure work from Laura Sheehan and Niamh Terry had the Sharks on the back foot and when the Chiefs set to work in their familiar pattern of short-range drives, it looked as though Kato has squirmed over, only for the referee to penalise the ball carrier for crawling after being tackled.

It was a let-off for the Sharks, who then turned defence into attack. With Daley-McLean pulling the strings at No.10, it was no surprise when the home side claimed the opening try of the game, England international Daley-McLean providing a wonderful inside ball to Neumann, who raced through the gap in the Chiefs defence to dot down unopposed. Daley-Mclean converted to open up a seven-point advantage at the break.

On the resumption, the Chiefs were quickly out of the traps as they looked to haul themselves back into the game. An early line-out in the Sale 22 gave them a decent attacking platform, but as they looked primed to strike, the ferocity of the Sale defence forced a knock-on and allowed them to build themselves into the same structure they had had in the first half.

The Sharks continued to look threatening at the other end, a cross-field kick from Daley-McLean asking questions of the Chiefs defence, which were answered superbly by winger Sheehan.

Moments later and Daley-McLean went close again, this time narrowly failing to find the target from a penalty opportunity.

At the other end, the Chiefs were themselves looking threatening, but they seemed to lack the final clinical pass. Several positive carries from both Cantorna and Flo Robinson went unrewarded as Sale maintained their edge at the breakdown.

With time ticking away, Sale’s Vicky Irwin saw yellow for a high tackle on Robinson – and her indiscretion gave Chiefs prime attacking opportunity as they searched for a way back into the match.

The Sharks continued to give up penalties at the breakdown and eventually, Appleby’s side were able to work their way over the line, Kato dotting down from a typically strong carry. Cantorna converted to level the scores and set up a grandstand finish in the final ten minutes.

Now with the ascendancy, the Chiefs suddenly seemed to come alive as they hunted the victory. Garnet Mackinder and McKinley Hunt both created chaos in the Sharks defence with decisive carries. However, the strength of the hosts at the breakdown ultimately meant those positive impacts mattered little.

As the game headed for a draw, there was still time for a final twist in the tale. With the Chiefs looking to play from deep in search of an unlikely victory, it was Bawden who struck for the home side, plucking a pass out of the air to race under the sticks to secure victory for the jubilant Sharks.

The Chiefs will now look to regroup, before a final day battle with Gloucester-Hartpury to determine who finishes fifth in the Allianz Premier 15s table.

Chiefs prop Sachiko Kato reaches out for the try-line