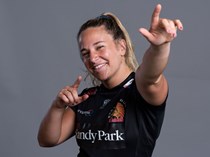 American international Gabby has made an immediate impact at Exeter Chiefs since joining in the summer of 2020 from American side Glendale Merlins, passing 100 points for the club against Bristol Bears this season.

Cantorna made her debut for the USA Eagles against World Champions New Zealand during the 2018 Autumn Internationals and has since gone on to win eight caps for her country.

Having started playing rugby at 14 with her father coaching her, Cantorna’s career has been littered with success. At University level, she won four National College Championships in five years for Pennsylvania State University - and in 2017 she was awarded MVP in the D1 Elite National Championship, whilst being part of the successful Glendale Merlins Women’s Premier League side that won the league title in 2019, after three successive seasons finishing runner-up.

Her performances in her debut campaign for the Chiefs saw her shortlisted for the Allianz Premier15s team of the season.

The opening round of the 2021/22 season saw Cantorna become the first Exeter Chiefs Women's player to pass 100 points and she has since moved beyond the 150 mark for the side. 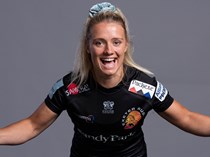 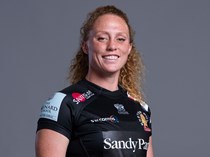