Exeter Chiefs head coach Rob Baxter admitted he took a "great deal of pride" from his side's showing as they completed a league double over reigning Aviva Premiership champions Harlequins.

Baxter watched on intently as his team battled back from conceding a converted Ugo Monye try early on to record a 27-16 victory at the Twickenham Stoop.

Fly-half Gareth Steenson (pictured) was the chief tormentor for the home side as not only did he help himself to an excellent 17-point haul with the boot, but his impressive on-field display also helped him create second half tries for Damian Welch and Luke Arscott.

Harlequins, who for an hour at least were always within sight of their Devon rivals, countered with further points through the boot of Nick Evans and Ben Botica, but it was never enough against a hugely energetic and vibrant Exeter side. 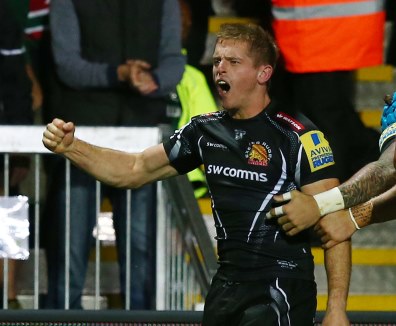 "I take a great deal of pride out of that performance," said Baxter afterwards. "But, at the same time, it does make you think if you can do to a side like Harlequins, we now have to start doing it to some other sides as well. What we need to do now is back this performance up. That will be the challenge over the final five games which, if we can, could ultimately drive us to where we want to be in the table.

"What this result has done is put us back in the mix again. Results elsewhere this weekend have helped to push us back into that middle group again and now we have to push on again."

Next up for the Chiefs will be the home visit of Leicester Tigers to Sandy Park on Saturday, March 23 (5pm) and Baxter says how his squad prepare themselves over the intervening period will be crucial to his side's top six aspirations.

"How we manage these next three weeks is very important to us," added Baxter. "We're giving the guys a break this week and a chance to recharge the batteries, but then it will be two solid weeks running into Leicester. For us that game has now taken on extra significance because what this result has done is make that game even bigger."

The Chiefs, however, will certainly go into that contest in good heart having become the first side to complete the league double over Harlequins this season.

Exeter's success in the capital meant they not only followed up their home win over London Welsh in some style, but at the same time the victory ensured them won on the road in in the Premiership for the first time since November when they won at London Irish.

"It was an important win," declared Baxter. "I wouldn't necessarily say it was our best-ever, but it does feel good because it feels like a justification of what we have been working hard at and where we feel we have been in terms of performance level. I think it shows we have been performing well recently, but not always getting the results or the points we necessarily deserved.

"It's not like we had to turn a corner or anything, we're not suddenly a different side or we had 15 different players out there, we feel we have been going well. Yes, we've made the odd mistake and one or two things have slipped away from us, but if you create opportunities and you work hard, then more often than not you will get your rewards for it. As I've said before, we are developing our game all the time and we did things today that we did better than a month ago simply because we are working at them.

"We're not a team that is standing still, we want to keep getting better and I think you saw an element of that out there in this game. Personally, I'm pleased for the players because they are the ones  who are working hard; they put the effort in last week and were rewarded [against Welsh], and they put the effort in again today and got rewards for it.

"I think we played at a good tempo and good intensity for the whole game, which in a way was key to the game. We knew to get anything from the game we had to keep that high level of intensity because Harlequins are a fantastic attacking side. Sometimes you have to work hard and long to get opportunities and that's what we did. We got those opportunities and crucially we took them."