Off-field politics were duly put to one side and it was the rugby that was on the lips of everyone as they departed Sandy Park late on Saturday evening.

Pre-match there had been plenty of debate as to the rights and wrongs of Exeter Chiefs staging a minute's silence in memory of the late Baroness Thatcher.

As it turned out, the mark of respect went off without a hitch and it was the display of Rob Baxter's side in sinking visiting London Irish that was making the real headlines.

The Chiefs kept alive their hopes of competing in next season's Heineken Cup by producing a fourth Aviva Premiership win in five games thanks to tries from Matt Jess and Dave Ewers, alongside further points from fly-halves Gareth Steenson and Henry Slade. 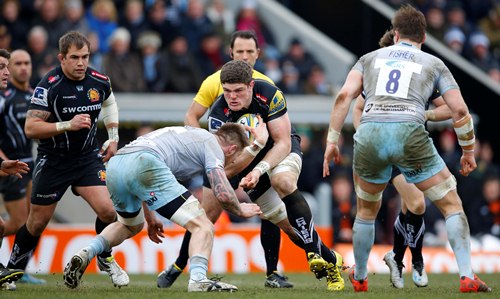 The Exiles, just a place off the foot of the table, countered with a penalty apiece from Tom Homer and Iam Humphreys, but in truth that was all they could muster against a resolute and determined Chiefs side.

Having recharged the batteries following their late victory at Worcester two weeks' earlier, the Chiefs returned to action sporting two changes from that which had started at Sixways. Both came in the pack where Brett Sturgess returned ahead of Carl Rimmer in the front-row for his first start since the home draw with Bath in December; whilst Ben White was given the nod in the back-row over Ewers.

Irish, meanwhile, welcomed back into their starting ranks Jebb Sinclair, Topsy Ojo, Leo Halavatau and Darren Allinson, whilst England international Alex Corbisero was another notable inclusion on the bench having missed previous games through injury.

On a mucky afternoon in the Westcountry, it was the Chiefs - aided by a strong wind at their backs - who set the early tone against the Exiles, who were beaten 27-23 by their Devon rivals at the Madejski Stadium back in November.

Steenson saw an early penalty chance sail wide of the left post after just nine minutes, but the Ulsterman made no such mistake when he was afforded a second chance moments later. This time the Exeter No.10 dispatched a sublime kick from halfway to give his side the early lead.

Irish countered with a kick of their own from the prolific Homer, but that would be their only reward in a one-side first period that saw the Chiefs continue to threaten at will.

Richard Baxter, James Scaysbrook and Haydn Thomas all threatened with a series of raids on the visiting line, the last of which was sadly spilled just inches from the line, whilst the deep running threat of Matt Jess, Jack Nowell and especially Luke Arscott was causing no end of problems to the visiting defence.

The Chiefs, though, continued to press hard in attack and although tries were not forthcoming, Steenson's deadly right boot continued to make Brian Smith's side pay for their mounting indiscretions.

Three successful Steenson penalties inside eight minutes just before the break stretched Exeter's grip on proceedings to 12-3, whilst another clever attack with virtually the last play of the half almost threatened to bring more reward.

Now up against the wind, it was the turn of the Chiefs to soak up some early pressure following the restart. However, the home side were more than man enough for the task in hand as they easily swallowed up what Irish had to offer in terms of attack.

With the threat repelled, the home side turned defence into attack, winning themselves yet another penalty which, as was the case in the first half, Steenson landed with aplomb to extend Exeter's grip on proceedings.

Irish, it has to be said, were improved after the break and although they cut the deficit with a penalty from Humphreys, it was the Chiefs who remained the more threatening in virtually every facet of play.

And that very point was underlined midway through the half when the Chiefs claimed the opening try of the game. Having won a penalty line-out just outside the Irish 22, the Exeter eight - later aided by the odd back or two - formed as one to propel themselves to within sight of the whitewash. Initially the threat was repelled by the Londoners, but when Thomas spotted numbers on the blindside, he passed to half-back colleague Steenson, whose slap pass found Jess, who made no mistake. 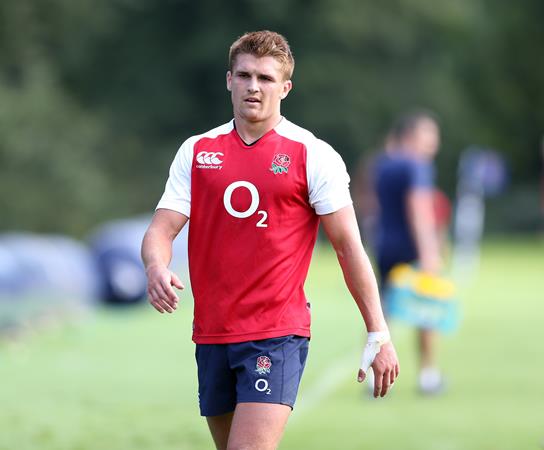 It was a first try for the 'Heamoor Flyer' since touching down against London Welsh at the Kassam Stadium back in mid-September. It was, though, a moment to savour for the Exeter speedster, who was quickly swamped by a plethora of team-mates keen on celebrating his fifth score of the season.

Steenson's touchline conversion fell short of the mark, but referee Martin Fox was not happy with the interference caused by an Irish runner and duly awarded a re-take. Steenson's second attempt had the distance this time round, but up against a strong wind it again blew away from the target right at the last minute.

Irish needed to respond, but although they huffed and puffed in attack, there was no way they were going to blow the Chiefs down. Exeter continued to dominate in their defensive duties and duly wrapped up their win in the dying embers of the match,

Fly-half Slade, on for his Premiership debut, almost snuck over with his first touch in the top flight with just three minutes left, before fellow young gun Ewers collected the ball five metres out and bulldozed his way over for a deserved second score. Slade converted to get his first points and seal a solid victory for the Devonians, who next week face another crunch clash, this time away to London Wasps.

UP NEXT FOR THE CHIEFS: v London Wasps (A), Aviva Premiership, Sunday, April 21 (2pm)