Exeter Chiefs head coach Rob Baxter believes his 2013/14 squad will be given the perfect build-up to next season's Aviva Premiership after today confirming the Devon club's pre-season friendlies.

In the first of three warm-up games the Chiefs will undertake ahead of their fourth year in English rugby's top flight, Exeter will head into Wales to face the Scarlets at Parc Y Scarlets on Saturday, August 17 (3pm).

It will mark the third time the two clubs have met in pre-season battle in recent years - and comes not long after the two clubs faced each other in this season's Heineken Cup competition. On both occasions this season, Baxter's side triumphed - winning 22-16 in Wales, before producing a 30-20 success at Sandy Park a week later.

Following this encounter in the Principality, the Chiefs will return to home comforts when they play host to Championship outfit Bristol on Saturday, August 24 (3pm).

Bristol, under the stewardship of former England and Scotland coach Andy Robinson for next season, have not tackled the Chiefs since the 2010 Championship Play-Off Finals, but have recruited strongly for next season with a number of players joining their ranks from Premiership clubs.

Exeter's final game will come on Saturday, August 31 (3pm) when they are again at home, this time to first-time Scottish visitors Glasgow Warriors.

The two clubs met at the start of the current season in Ayr, when the Chiefs claimed a hard fought 15-6 victory - and this latest match-up is a reciprocal fixture agreed between the two clubs.

Commenting on the games, Baxter said: "I think if you look at the three fixtures, all of them offer us a good test of what we know will be another tough season in the Premiership next year. We've played the Scarlets twice before in pre-season, as well as this year in the Heineken Cup, both here and up at their place, and every time we've had a good battle with them. The first year especially was a really useful work-out for us because it showed us the intensity we would need to have to compete in the Premiership. 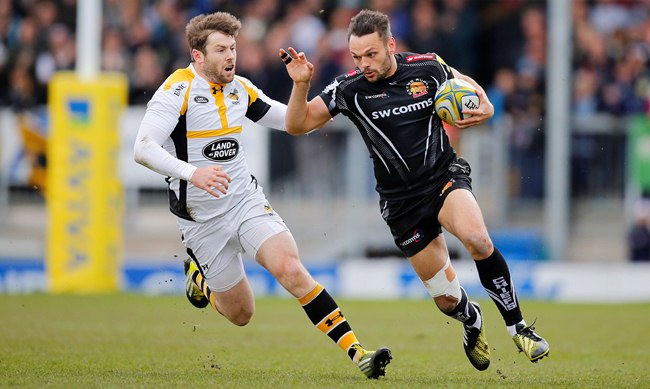 "As for Bristol, again we've had a number of clashes with them over the years. Normally we've tended to take on the Pirates in pre-season, but for various reasons that's not come about this time round and we're delighted that Bristol have agreed to play us. Just looking at what they've recruited for next season - and what they've already got at the club - again it should provide us with a real decent test.

"We finish off the games with Glasgow, which in itself is just a return fixture based on us going up to their place this year. Obviously we enjoyed going up to Scotland at the start of the year and playing in what was a very tough game of rugby against them. As we've seen since, Glasgow have done very well in the Rabo Prodirect League this season, so in a lot of ways we feel it's another good challenge for us leading into that first game of the new Premiership season."

Season ticket holders for next season will be able to watch both the Bristol and Glasgow games as part of their seasonal package. Anyone wishing to sign up for a Chiefs Season Ticket can do so by clicking here