Chiefs side to face Worcester 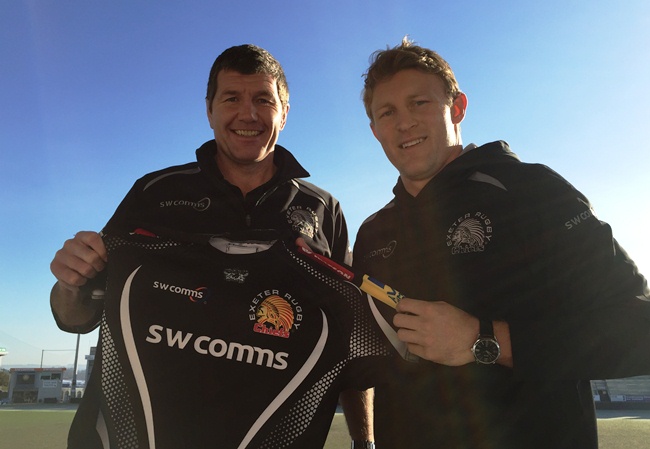 Exeter Chiefs have experienced there fair share of dramatic moments since arriving in the Aviva Premiership, but last season's last-gasp victory at Worcester Warriors must surely top the list of highlights.

With just minutes remaining at Sixways, the Devon club produced a stunning fightback to score two tries in as many minutes to not only sink their rivals 31-26, but at the same time secure Heineken Cup rugby for the first time in their history.

It was - according to head coach Rob Baxter - a day to remember for the right reasons. However, as he readies his troops for a return to the Midlands tomorrow (3pm), the Chiefs head coach has issued a timely warning to his players that nothing short of a top performance will be needed to ensure a similar outcome.

"We've talked to the players a lot this week about the game up there last season, because the truth is we should have lost that game," said Baxter. "With ten minutes to go we were well beaten. We had played well in parts and scored some points, but then we lacked some discipline; we gave away a couple of silly penalites that allowed Worcester to get back at us; and they then scored a bit of a freak try when the ball richocheted off the crossbar from a kick ahead. All of a sudden the game started to get tough for us and we didn't really respond all that well.

"It wasn't until near the end that we did respond with what was a five minute burst of almost outstanding rugby. Being honest, that isn't going to happen all that often, so what our players need to remember is that they've only three times at home in the Premiership; they have a good home record; and that they are a different proposition at home.

"Going up there this weekend, I think we have to be ready for a big challenge. If we go up there ready to meet a big challenge, then we normally tend to do quite well. But if we go up with the wrong mindset, Worcester are exactly the kind of side who will turn you over and spoil your plans.

"We've looked at them this week and we've got a lot of respect for them. They've got a lot of points this season; they're out of the danger zone and they're just a place below us in the table. Quite often we like to say the table doesn't lie, so when we were fifth last season we felt we deserved to be there. At the minute we are eighth, so we probably deserve to be there. Worcester are only one spot behind us, so going into this weekend there is definitely lots to play for."

Undone narrowly 12-9 at home to Leicester Tigers last Saturday, the Chiefs will be hoping for an instant response as their quest to get themselves within the division's all-important top six intensifies with just four league games of the season remaining.

Ten points from their last three games against London Welsh, Harlequins and the Tigers has certainly got the Chiefs moving in the right direction, but Baxter believes a similar tally will be needed if his side are to stand any chance of competing alongside Europe's elite again next term.

"There are a few more shots to be fired in the rounds, simply because we still have to play Wasps and Gloucester, both of whom are above us in the table," said Baxter, who this week was named as part of Stuart Lancaster's England coaching team for this summer's tour to Argentina.

"However, I think if we did lose this weekend getting into that top six will start to become more difficult. The reality is we've picked up ten points over our last three games and that's the kind of form we have to show over these next three games to make sure that last game [against Gloucester] is worth fighting for.

"That's why I said this weekend's game is a very important game for us. The players are certainly aware of that and we have to go out and play like that."

Despite last Saturday's physical encounter with the Tigers, Baxter sticks largely with the same personnel for tomorrow's trip. The sole change to his starting XV sees James Scaysbrook (pictured), who missed the game last weekend due to the birth of his second daughter, return in the back-row in place of Ben White.

White moves onto the bench at the expense of former Warriors player Kai Horstmann, whilst Fijian international Sireli Naqelevuki is also back on the bench in place of Ian Whitten after missing out last week due to a knee injury.

CHIEFS SIDE TO FACE WORCESTER