Exeter Chiefs head coach Rob Baxter believes Sunday's Aviva Premiership clash at London Wasps will be like a "Cup Final" for his team as they look to secure a top six placing for a second successive season.

Twelve months ago, the Devon outfit ensured Heineken Cup rugby for the first time in the club's history - and hopes are high within the Chiefs camp that they can once again be rubbing shoulders with the rich and famous of Europe next season.

Last Saturday's 27-6 home win over London Irish certainly bolstered their cause as they leapt over both Wasps and Bath into the final qualifying spot, but Baxter knows that the job is far from complete and that another stiff test awaits his team this weekend at Adams Park (2pm).

He said: "It is a little bit like we got through a cup semi-final against Irish and play the cup final next week in some ways – those are the games you want to play in at this stage of the season. We have talked about it for quite a few weeks. The top six spots have been within our grasp and we have to show ambition and determination to make a real fight for it. 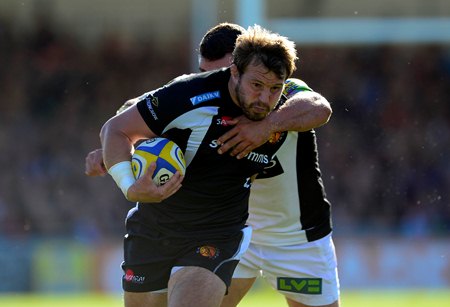 "If you look at our form now – it is four wins out of five – we feel like we are playing pretty well. The boys seem fit and energised, they are turning up for training and enjoying things. It is nice to be turning up for training knowing your season is not dead. We have got two fantastic games to come. Wasps away is next and it feels a little like it could be a winner-takes-all game."

The Chiefs, though, will head to Wycombe full of confidence having not only hit form at the right time, but also safe in the knowledge that they have beaten their rivals in the past five league and Cup meetings between the two clubs.

Saturday's 21-point victory - which included second half tries from Matt Jess and Dave Ewers - was another notable win for the Chiefs, especially given the testing conditions both overhead and underfoot.

Baxter added: "It was a satisfactory afternoon for us,. You have to say, in those conditions, at this time of year, that kind of score shows a convincing win. Having said that, it was tough for a long time and London Irish came here with really good line speed and were very effective in the tackle area.

"They stood in front of us for long periods and I was starting to feel that we had not made enough of the strong breeze behind us in the first half but we cranked things up a little bit and started to get more momentum. We weathered some tough moments, some ten-metre pressure and five-metre pressure on several occasions without giving up a score.

"Conceding a try would have made it an uncomfortable last 20 minutes, but we didn't and then went to the other end and converted our own chances. We were aware the wind would die a little in the second half – it does tend to here - and winning the toss was important to get the best of the pitch and the wind."