Townsend at the double for England 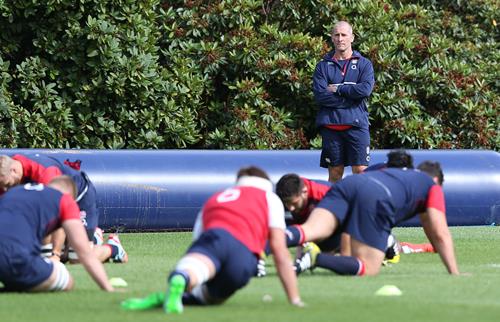 The talented scrum-half, along with forwards Luke Chapman and Charlie Hewitt, was one of three Chiefs players to feature for John Fletcher's side, whose others points came courtesy of

The hosts got off to a dream start and were ahead with just two minutes on the clock - aggressive running created an overlap and Fowlie went over in the corner. Scotland fought back though and were rewarded after a spell in England’s 22 with a penalty, duly converted by full back Gavin Parker.

But the visitors were reduced to 14-men with 17 minutes played when No. 8 Alasdair Mackie took England full-back Howard Packman out in the air and England made the man advantage count. They had their second try of the afternoon with 24 played, elusive running and some deft offloads created space and Fowlie was given the ball 10 yards out to dive over for his second try.

The hosts had their third with 28 played, Herron showed good strength to shrug off a couple of challenges before touching down between the posts and the London Irish back converted his own try to make it 17-3.

Minutes later and England had scored again, good work from the pack eventually freed up space for flanker Andrew Hughes to dot down, and there was still time for England to score their fifth before the break. Good pace from wing Tom Howe set up Townsend to score and Herron made no mistake with the conversion.

Scotland started the second half positively and had their first try two minutes after the restart, a strong rolling maul was eventually touched down by lock Neil Irvine-Hess but England hit straight back and Townsend showed good strength to touch down over the line.

England’s seventh try came after 56 minutes, a nice step from replacement No. 9 James Mitchell freed up the impressive Nick Tompkins to touch down for a deserved try.
To score nine-tries is a credit to the guys – Chisholm

Scotland never let up though and had their second try with ten minutes left to play, smooth passing from the backs eventually created space for replacement wing Iain Sim to score in the corner to make it 43-13.
However, England kicked on again and Tompkins’ second try came minutes later and with the last play of the game, No. 10 Sharp picked up a loose Scotland pass to run in from over half way, Herron converted to secure the 57-13 win.

Captain James Chisholm said: “We’re delighted to get the win, to score nine-tries is a credit to the guys and I think we deserved it for the way we played. Scotland never let up though and fair play to them, it was a tough Test match.  You can’t single out any individuals, the whole squad played their part and we’re really looking forward to heading over to France for the FIRA/AER European Championship later this month.”